Well I told you I would post some pictures of my herb garden. Not to pretty right now. All of the things laying around in the garden is to dissuade Luke from getting into the garden. Notice the caution tape? There is electric fence wire between them. The fence doesn't have electric to it, it's just a small barrier for him.He's too lazy to try to go through it. (knock on wood) 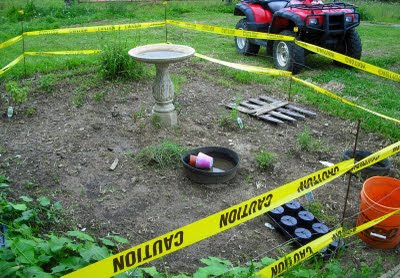 The other day I had my hair cut at work. My hair had gotten to the point of either cutting it or shaving it. (girls, you know where I'm coming from)I told the hairstylist just to do something. I didn't care what. Well this is what she gave me. Not bad, kinda cute,now that I look at the pictures, but just not my style. The sides of my head reminded me of chicken wings. 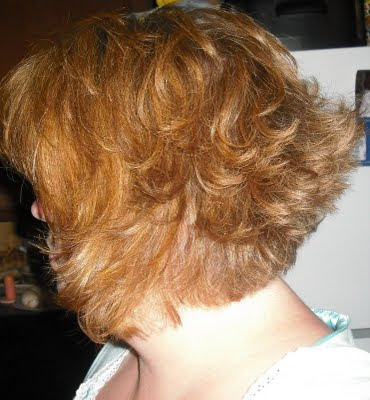 So I asked Hubby what he though. He look me, his head tilted sideways. "Turn around," he said. I turned. 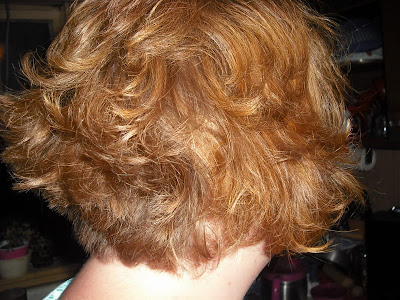 He started laughing. "Guess what?" he said. "Chicken butt!"

"You have a chicken on your head! The back of your head looks like a chicken's butt."

Well, if you look at it, I guess it does. Needless to say, the next day at work, I had it cut into a totally different style. Not because of what he said, but because I kind of thought the same thing.lol

oh wow it totally does look like chicken butt. Reminds me of the Judy chicken we had just no gray... LOL

Lol Kind of Buff Orpington Style!!
Thats probably what I will have to do to keep my gardens from being destroyed by the Man with the Weedeater otherwise known as my dear hubby!! Lol

I have to tell you that I think it's cute. I like a hair cut that is light and curly...You should have left it alone...so now what does it look like?...debbie

I think it looks cute.

SFG,
It looked cute, and so what if it was a chicken's butt, LOL! You can style it diffrently, so it doesn't look like that. How is it now, pictures please! Let's see those nails too*wink*

Your herb garden has LOTS of room for more, what ya got planted so far? I can make suggestions, but don't know if they'll grow in your zone, although if they grow in zone 4 they should grow anywhere.
I'm thinking of cutting my hair shorter too, right now it's a bit below the shoulder. The ole saying goes, the older you are the shorter your hair should be, right? So right now it's just about right, mid shoulder, for middle age*wink*

I think its a cute style, but I can see the resemblance to a chicken. However, only those of us who are familiar with chickies would think of that. And though it is a cute cut, I totally identify with it "not being me." There are lots of adorable hair styles, but you have to find the one that goes with you!

Hubby is enjoying all of the comments about the "chicken butt." Maybe I will post pictures of my new hair cut. Sorry Kelle, you don't want to see my nails. uuuuggghhh. I have to get a good picture of me first. I HATE pictures of myself.

SFG, tell your husband...that was funny! I know..the only guy brave enough to post a comment...but it was funny! Good luck with your new dew! R Dean

I think it's cute and my stylist cut mine the same way once. But...just like you I thought it looked like a chicken butt and went back and had it cut again.
Are you gonna show us pics of the new style? We'd love to see it.