Does anyone have a good home remedy for achy hands and wrists?

Is it just me, or does anybody else get the heebie jeebies watching the news lately? What is going on out there!!!!! Fights and protests. Prices going up on everything!!! Natural disasters. How could anyone say that our world is doing fine. It's not people! It's time to get prepared!

We have a friend who owns a grocery store. He said it is "unreal" how much the prices have gone up. In one day the cost of coffee went from $6.99 to $13.99. Sugar is no longer just $1.25 for 5 lbs. Wheat and corn  costs are going through the roof. Don't even get me started on butter. Another reason for getting a milk cow. lol.

The price of gas is really skyrocketing to prices that we haven't seen in a while. Will people stop doing their normal running when prices get to $5 a gallon? Truthfully? Probably not. They will pay it and keep going on. They will cut back on other things, like buying the $.75 mac and cheese instead of buying the bag of apples.Then our health will take a downturn. Then we will have to pay for health care.  It just keeps going and going. Yet people don't want to admit that they can't live the life that they have been. Will that change if we see gas prices at $10 a gallon?

Another thing is, the government is broke people. WE are broke. People don't want to see the U.S. in debt but they are not willing to sacrifice anything. Well, something's got to give. People aren't going to be able to live the life they are use to. Sacrifices have to be made. This is coming from a person who puts fake fingernails on  people. And you want to hear something funny? My business is growing! I mean, come on people! Are fake fingernails a necessity? Don't get me wrong, I'll take your money. It won't hurt my feelings. But please don't make me sit and listen to you complain about not being about to afford gas or food or electric. Your nails cost you anywhere from $25 to $50. That could buy a bunch of apples and oranges. A few gallons of gas. And it could take a chunk out of your electric bill. We can't keep living like this! When are people going to realize? Oh, I know, when THEY are actually asked to sacrifice something. It either has to be higher taxes on everyone, including the poor, or sacrifices like jobs and food stamps or the like.

The only thing that I can do right now is just prepare. Something has got to give in this pressure cooker situation. There is going to be a change that will be forced on us all. Some how some way. Me? I'm trying to live a sustainable life. I'm not as close to self sufficiency as I want to be, but I keep trying. I try to learn new things all the time. Whether it be gardening, saving seeds, making my own bread, taking care of animals that will provide food for me and my family, growing herbs for medicine or just plain old how to be content with what we have. It's a journey that I'm on. I still buy bread at the store, but as soon as I get REAL comfortable with making my own bread that will stop. I still buy milk. As soon as my goats have babies, I'll have milk. I'll learn how to make cheese, soap, and a whole lot of other things. But buy learning how to do these things, I depend on other people for things less and less. It's a good feeling.

So if you are starting to get the heebie jeebies like me, you might want to start seeing where you can change your life into becoming a little more self sufficient. Maybe not a HUGE plunge into the self sufficient pool, but maybe a little toe.

I Need Some Input 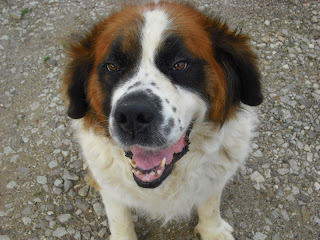 You all remember Luke. Luke is our lovable family/farm dog. But, Luke is getting old. He is 11 yrs old. That's old for a St. Bernard. He doesn't get around like he use to. I feel sorry for the feller because he thinks he's still the guard dog around here. We love him to pieces but, we also know that he won't be with us much longer. (I'm talking years here people, not days.) Now the input that I need from you guys is this.....

As I go about my day, I have been noticing signs of spring. I'm so excited! I know there will also still be signs of winter, but I'm not going to think about that right now. lol. I notice that the birds are starting to sing again. Before, when you would go outside, all you could hear was the wind. Now, it's like the birds are saying,"Hey guys, it's just around the corner!"

Another sign of spring, my rooster is crowing more. I wander sometimes if he even takes a breath in between his crows. Maybe is realized I'm planning on getting another rooster this year. lol. The girls(hens) are wanted out of the chicken house as soon as I open the door. They want to go out and stretch their wings and hunt for bugs that are coming out of the frozen ground.

I also noticed that the winter coats of the animals are starting to shed. The goats' under coats are starting to work their way up to the top so that it can be shed. It must be itchy, they are rubbing themselves on everything! lol. I'm getting ready for my St. Bernard's coat to start floating in the air. It's worse than pollen. It's everywhere!

Our pond, FINALLY has thawed out. It has been frozen since the first day of December. Yesterday, it had no ice on it. Yea!

Another sign of spring doesn't show up until night time. No, it's not the wonderful sound of peepers coming from the pond. OOOOHHHHH NOOOOOOO! It's the pungent smell of skunks. Spring is their time for breeding. For some reason, skunks must love that nasty smell. So, I think, they go around and spray everything in the world  hoping that their "Prince Smelly" will come and sweep them off their feet. I'm just afraid that I'm going to be out putting up the animals one night and encounter one of those little stinkers. That would not be good.

The sun is shining.
The breeze is blowing.
The birds are sing.
The thermometer is rising.

No, I mean REALLY prepared? Some of us like to think we are prepared for many things. It's not until you actually have to use your prepper skills that you learn, in what areas, you lack. Well, guess what? I am not as prepared as I thought I was.

Last night at 8:30 pm our electric went out.  Ok, now what? Well, I stumbled around and found a flashlight. I lit some candles and some oil lamps. Let there be light. And it was good. Hehe. Next I realized that I didn't have a phone in the house that would work if the electric went out. Great. Now I have to go up to the old house and get the land line phone. Bundle up, start four wheeler, and ride up to old house in the cold wind. As I'm up at the old house, I get another oil lamp and some more candles. I finally get back down to the new house and hook up the phone.  I called around and found out the electric was out to a whole lot of people.  This could take a while. I was already bored, might as well get ready for bed. No bath tonight for me. No water. We have a well and an electric pump.

Now, we heat with a wood stove so heat wasn't a problem. Well, almost not a problem. We have a fan that runs on the stove to circulate the hot air. With no electric, it didn't work either. With no air circulating, the house gets really cold. We don't have much insulation,(yet) so heat just goes up and out.  It was going to get cold and my electric blanket wasn't working either. They were predicting lows in the 20's. I went and got another comforter and put it on the bed. There were so many heavy blankets, I needed a jack to jack up the blankets just so I could turn over. lol. I put on fuzzy pants and a warm shirt. I snuggled down in the blankets and tried to sleep.  "Tried" being the word here. It was too quiet and too dark. No night lights. When you live in a basement it can get REALLY dark.  I couldn't tell if I had my eyes open or not. lol.

I decided to read. I took a flashlight and read a little.  A little turned into 2 hrs. I just couldn't sleep! Finally I dozed off. 2 hrs later I wake up sweating. I was HOT!!!!! I checked our thermometer. It was only down to 59 degrees. It is normally that at night anyways,even with the fan running. I got up, put more wood in the stove and went back to bed, minus the fuzzy pants.  Still couldn't sleep. At 3:45 am, the electric came back on. I then went through the house and turned off all the lights that I had left on. Got back into bed and slept like a baby. I could hear the refrigerator running, the fan on the stove, and I could see the small night light in the hallway. All was back to normal.

Now the moral of the story is.....Could I live without electric? Yes.  But, I have a lot of work to do before I do. lol

The Good, The Bad, And The Ugly

The bad part is... all of the ground is a muddy mess. 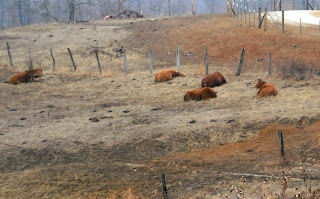 The chickens are just out scratching around, hoping to find a bug or two. If they do find a bug, it will be a frozen dinner. 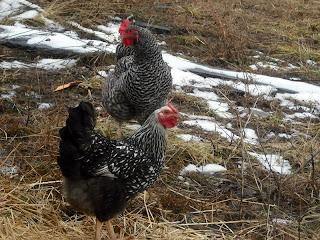 And of course the REAL lazy one around here. 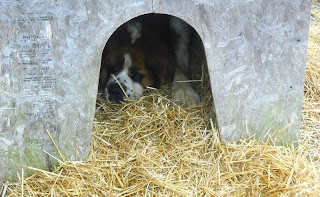