Oh No, Not Again!

This holiday weekend was a very busy one. Me and Hubby had 3, stuff your face, dinners to attend. So not wanting to disappoint anyone, that's exactly what I did.  I stuffed my face. Three times. hehehe.

Now that Thanksgiving is over with and Christmas and New Years is just around the corner, I'm starting to think about spring. Yes, spring. We haven't even had our first snow yet! But, I'm starting to think about Spring. When will I get to start in the garden? What will I plant in the garden? Where will I plant my new fruit trees? ( I don't even know what kind of fruit trees. Oh wait, something else to think about!)  What am I going to plant in my herb garden?(I have decided to put my herbs in raised beds this year. Beds that I haven't even made yet. Great, something else to think about.) I'm getting the spring bug. The spring bug at the beginning of WINTER!!!!

I know I am pumping myself up for a big let down. I will never get everything done that I have planned for this spring. It will be too wet, or too cold, or too dry, or too hot. There is always be an excuse for me not to get everything done. And then, I'll be disappointed and feel like a lazy bum. lol.

I'm going to have to reign myself in. Maybe start smaller. Something like moving the garden closer to the new house this year. I think I can do that. (Well, I can supervise while Hubby does it with the tractor. hehehe) Or maybe I'll plant one or two trees. I think I can do that. I've got all winter to think about what I want to do when warmer weather gets here. Now, if only my body will agree with me when it's time to actually DO it this spring.

Labels: statement of the day 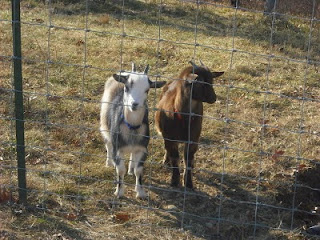 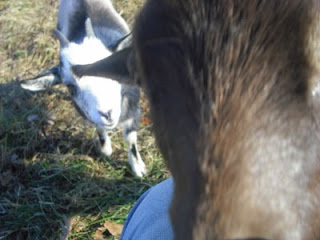 
Hi everyone! I bet you thought I fell off of the face of the Earth. Nope, still here. We are just extremely busy!!!!The last time I posted on here, I was telling you about the new goat we were given. Well, she didn't work out. She was extremely mean to our two younger ones. Plus, with us just having a small place for them to get in out of the weather, she wouldn't let them in. They were sleeping outside in the rain. I wasn't going to have that. So we ended up giving her to Hubby's dad. He seemed like he was happy about that. I think he missed seeing goats in his field since we FINALLY brought our goats home. Yea!!!! Now you guys will be bombarded with cute little goat pictures. hehehehehe.

They seem to be really happy here. But, getting them here was another story. lol. It took 5 of us to corner and tackle the poor little things. They hadn't been touched since they were bought. That was back in May. They were wild as bucks. hehehe. Once they got here though, they are starting to come around. They aren't scared of us now.

Now to the cows....They are starting to have their babies. Yes, I know that it is late in the year for calves, but, we keep our bull in with the cows. We seem to lose less breeding opportunities that way.  We have such good momma cows, they take really go care of the babies. Plus, the babies are born already wearing their winter coats. lol.

Now to the horse....We had to give away one of our horses. Scout, the young one. He had developed a bad habit of chasing the cows. I don't mean pushing them out of his way. I mean he would run one until it couldn't run anymore. Then when we started getting babies, he started running them. We are NOT going to put up with that. We didn't have a place to separate him from the cattle, so we decided to give him to someone who would love him and take good care of him. Plus, now he will get more of a chance to be ridden. We just don't ride as much as we use to. We hated to get rid of him, but we think it's for the best. 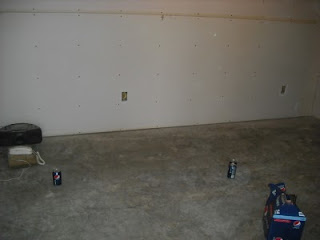 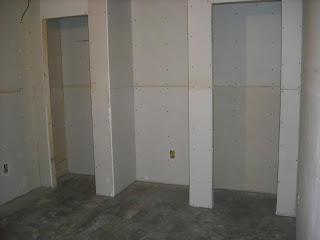 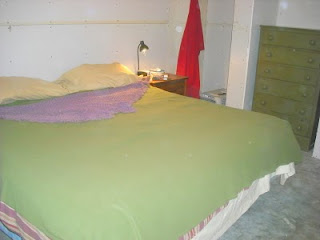 (Don't ask me why the pictures are not all in the center. I have no idea.)

Not much to work with here, but it is home. I am happy. More pictures to come! Especially now that I found my camera cord. hehehehehe.

Well, we are getting desperate. With Hubby not working for over a month now, (Still waiting on the railroad.) and not having any unemployment, it was getting to the point of selling the fillings in my teeth. (Not really, I don't have any fillings in my teeth.) I always wanted to live off grid, but I didn't want it to be because I couldn't pay my electric bill. lol

Anyway, we decided to sell some of our cattle. Now we only a few cows now and their babies were old enough to go to the market.If you have never been to a cattle sale, you need to go! There is excitement everywhere! From the sales ring, to the cattle pens in the back, you don't know what to watch first.  I love the sales! I like watching the older gentlemen buying thousands of dollars worth of cattle just by one TINY flick of their finger. If you was not watching, you wouldn't know who was bidding. I liked looking in  the back pens at all of the cattle milling around. To watch the cattle, you walk up on this giant catwalk that covers the whole length of the pens. While we were watching, we seen a calf kick the hat off of the guy trying to get him down a shoot. One year we seen a 2400 lbs bull jump the metal panels that made up the sides of his pen. He got his back legs caught in the bars of the panels. We got the attention of one of the handlers to see if he could help him. The handler couldn't get him off of the panel. Hubby had to go down, and with the help of a very big pipe, got his legs untangled from the panel. And then, they run. The bull was not happy. He wanted to hurt something. Luckily, he didn't. lol

Anyway, we went to the sale Monday and sold some of our cattle. We DID learn something while we were there. If it was a black calf, it was worth one third more than any other color. Why? Because of the Angus craze that everyone seems to be in now.  If the calf coming into the sales pen was brown, the auctioneer started the bidding out at $.60 per pound. It could go up or it could go down. It usually went down some. But, if it was a black calf, the auctioneer would start out at $.90 per pound. Then it usually went up! What's wrong with that?! Are they prejudice? lol. Since our cattle is red, we didn't get the best price for them. Although after seeing how the sale went, we are now considering getting a black limousine bull. We shall see. It changes so often. We don't really want to mix our colors. ( I guess we ARE prejudice. lol)

So that's what's been going on around here this weekend, now we are going to build a goat pen so we can bring our little goaties to our house.

I had every intention to post some "before" pictures of the house. I promise!!!! But,(you knew it was coming) I can't find the cable that goes from the camera to the computer. AUUGGGHHH!!! That is the worst thing about moving, you can never find what you need! It's really driving me crazy. So far I have lost my winter coat, one(that's right, one) boot, and only a million other things. So as soon as I find the cable, I promise to post some pictures on here. lol.

One good thing that has happened, we got another goat. It's just like Lay's potato chips, you can't have just one. Or, in my case, you can't have just two. Since the goats are down at Hubby's dad's house, people can drive by and see them. A few days ago someone stopped at their house and asked if they wanted a goat just like the ones they had. My MIL told them they would. She knew I would take it. hehe

The owner decided that they couldn't keep the goat in a place where it could be hurt, so they asked my MIL if she wanted the goat. I'm so glad she said yes. We now have the sweetest, little, cuddly goat. One that can be bred any time now. Yea!!!! Goat milk soon!!!!!

This week me and Hubby plan on building the goat pen. That way we will have the goats at our house. And if I can find the camera cable, I'll be able to post some goat pictures. Double yea!!!

Now that I have your attention, I'm talking about the trees. LOL (Get your mind out of the gutter!) All the leaves are gone. One minute they are green and lush. You blink and they have turned colors and then they are gone.

I love fall, but, it doesn't last very long. Today, in fact, the weather man was talking about snow this weekend! SNOW! It's just hard to comprehend. I know it's time for it and all. I just have to convince my body that it is time for it. lol. Well, to get prepared, we have been cutting and splitting wood.  My body is NOT use to THAT. Every cell in my body is sore. I think my hair is even sore. lol. But, it's a good sore. I can say that I got my pilot license today. Hubby would cut and split the wood, and I would pilot (Get it, pile it? hehehhe).

Hubby has also, been stringing fence the past few days. The county took down over 1500 ft of fence when they came through to widen the road. We have to put it back up. Just doesn't seem fair. But, they did get us new fence post and barbwire. Plus, you can look at it this way. They did clean out our fence line for us. lol. We need the fence back up before winter. The part of the fence that they took down is the part were we feed the cattle in the winter. And since the weatherman did say we could have snow this week, I can say that winter is here. hehehehe.  Are you ready?