Questions About The Definition of Homesteading

I've had this subject on my mind for a while.  One day as I was scrolling through Facebook, I noticed a post where someone was asking about living "off grid".   He basically asked if having gas appliances was considered being off grid?  The answer from most of the people who left comments was, "It might not be sustainable, but it was considered "off grid"."  So with that being said, it got me to thinking, "What about homesteading?"  What's your definition of homesteading?

Is it making a living off of your homestead?  Does having a job outside of your home disqualify you as being a homesteader?  What about living with electric from the grid?  What about solar? Sooner or later the batteries will go bad.  At what point does just "farming" become homesteading?

I would really like to know your thoughts on this!! 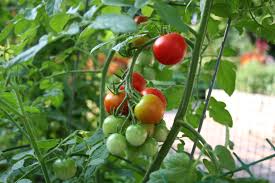 It will soon be that time of the year.  The time when we'll be receiving the seed catalogs in the mail.  I LOVE getting these.  They are usually full of hopes and dreams of what next years garden is going to look like.  I'd look through them and ooooh  and aaaaah  over how pretty all the vegetables looked, but I would never actually read about the vegetables.  I wouldn't even buy any seeds from the magazines.  This year I'm hoping things will be different.  My plans, as of right now, is to actually study the magazines.  I'm actually going to look at what these different veggies have to offer.  Are they open pollinated?  Are they heirloom?  Are they going to give me plenty of food for the time that I'll be putting in them?  These are some of the questions that I'm going to be answering for myself.

Most years I've gotten most of my seeds from the local farm store.  Now don't get me wrong, there's nothing wrong with some of these seeds.  A lot of the farm stores around here carry heirloom seeds, so I usually try to get them.  But, these stores usually carry the same seeds every year. Granted, it's usually the seeds that sell the best for a reason. I'm just ready for a change.  We plan on planting some of the seeds that we KNOW we love, but I'm also going to try seeds that we have never tried before.  For instants,  we like green beans, but we are getting a little tired of Blue Lake bush beans.  In fact, we have jars of them left from year before last.  We are going to try half runners or pole beans.  We're going to try making leather britches this year so I have to find a good bean for them.  We also are going to try dried beans.  We LOVE eating soup beans but I've never planted any before.  I can't wait to try all different types.

We aren't just going to stop at beans.  We're going to try different corn and different tomatoes and different onions and peppers.  The list is going to be hard to narrow down.  We're still going to stick with some good standard plants in part of the garden but, we are also going to have an experimental section.  I feel like a mad scientist.  (Insert evil laugh!)

Do you have a favorite vegetable that you grow? 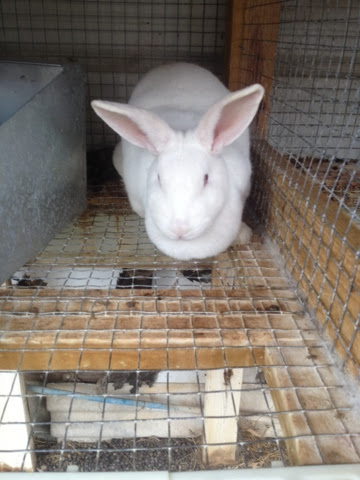 We are alive!!!!  The storms blew through last night and they weren't as bad here as they were out in Indiana and Illinois.(Thank goodness)  We just had a bit of wind and a whole days worth of rain.  (Where were you, rain, back in the summer?)  Anyway, around our region, there are a some people without electric and such.  We are not one of them. (Once again, thank goodness.)   So of course to use my electric for good, I decide to post something on my blog. hehehe

Last weekend we acquired two nice New Zealand rabbits.  A Buck and a doe.  The buck is really nice.  The doe,  well, let's just say is a nice rabbit, but her attitude leaves something to be desired.  We officially called her the Great White Ninja Rabbit.  She will see you coming and when you open her door to give her some water or clean out her bowl, she STRIKES!  She will try and attack your hand.  If that doesn't scare you into leaving her alone, she stands back and acts like she's going to launch herself at you.  It's actually kind of funny.  If she gets too bad, I just bop her on the head when she, cough, "charges."   Oh well,  we didn't get her to become a pet.  As long as she can have babies, that's all that matters to me.  And if she can't,  she will probably end up in someones crock pot.  I'll try and get a picture of her up later but, if you've seen one white rabbit, you've seen them all.  :-)

I've been feeling very "holiday" around here lately.  I'm already thinking about decorating.  I normally don't like to decorate until a couple weeks before Christmas, but this year I'm starting now!  I know, I know, I've always been one of those people that would tell other people to "give the turkey a chance!"  but, I'm just so into decorating this year!!!!  There is different though.  I'm MAKING a lot of my Christmas decorations, therefore I have to start early.  When I get some done, I'll take some pictures and put them on here.

Well, I hear some hungry animals calling my name,

That Time Of Year

This is what I saw when I looked out my window Tuesday morning. Snow. I guess this means the warm weather is over. Our busy season should be over. (Ya, right.) 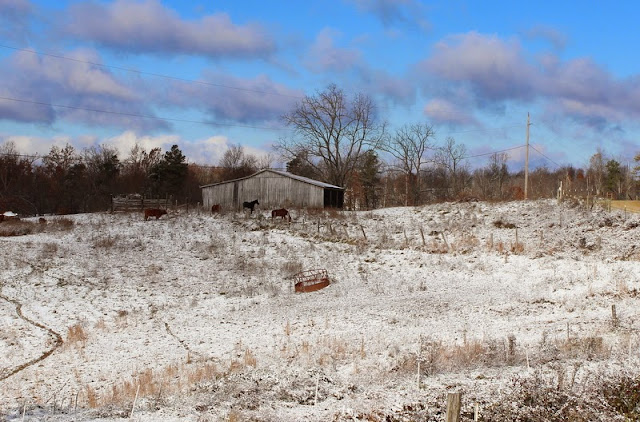 Seeing this makes me want to start decorating for Christmas already.  I know, I know, give the turkey a chance.   I am, but I'm also doing a lot of things around the house lately.  Things that I couldn't get to during the warmer weather.  I can say my house hasn't been this clean in a long time.  Not that it's clean now, it's just "cleaner". 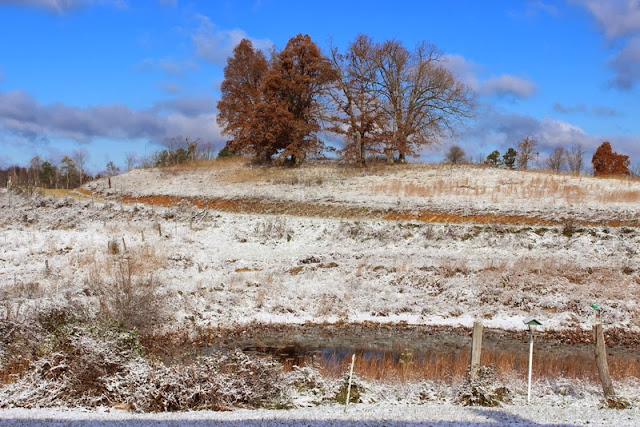 So until next time

P.s.  These pictures haven't been touched up.  The sky is actually that blue.

I have, what I call, Inspirational People, in my life.  People that make me want to strive to be a better person.  I'm not saying I'm not great. hehehe.  I think though, that people can always better themselves in some way.  These people may inspire me in a big or small way.  They may inspire me in different types of ways. It doesn't matter.  All I know, is that they DO inspire me.

One person who inspires me is Sara of Punkin's Patch.  She is a person who inspires me to be a busy person.  This is one lady who doesn't let the grass grow under her feet. (Which her sheep may be disappointed in. lol)  She is very busy.  But because she is busy, she has accomplished a lot.  Her farm is beautiful!  Her photography is beautiful.  Her artwork is beautiful.  And she, herself, is beautiful.  The reason is because she works at it.  She's not one of those people that just let things "happen" to her.  She goes out there and "makes" things happen.  I don't know if I've ever met someone with so many irons in the fire.  And just being around her, makes me want to DO something.  She is very motivating!  Therefore,  I consider her one of my Inspirational People.

Another one of these people is Phelan.    She is completely different than any other person that I've ever met.  But, she's okay with being different.  It keeps things interesting. She makes me think outside the box.

One more of my Inspirational People, is my friend Catherine.  Catherine, if given the chance, would have sailed around the world with Christopher Columbus just to see if the world WAS flat.  She is one of those people that will try anything.  No matter how many people tell her something won't work, she will give it a try just to see for herself.  She's not afraid to fail.  That's what I call fearless. She inspires me to not to listen to what everyone else says, give it a try.

Now,these are not the only people that inspire me.  There are MANY more family and friends in my life that do and for many more different reasons.  I don't have a big enough blog to put them all on here. The main reason I wrote this post is so that maybe someone out there in Blog Land will look around at the people in their life and realize how these people inspire them.  Sometimes we just have to look around us for inspiration.