Nothing really exciting happening around here. Just me being sick. Not just sick, we are talking SICK!!!! Ok, I'm a little over dramatizing it a bit. But, I've had this "funk" for over a week now. Hubby finally made me go to urgent care Saturday. I, of course, didn't want to go. But he won out. He's stubborn that way. lol

Well, I went in having a small fever and a cough. I came out having the worst pain ever and wanting a divorce. lol. They gave me TWO shots in the butt! Antibiotics and steroids. The antibiotics were no problem. The steroids were another story. It felt like they were shooting molten lava into my hip. What made it worse was the snickers that were coming from the corner of the room. Yep, Hubby. He thought it was funny that I was getting a shot in the butt. He's lucky that I didn't have something heavy within reach to through at him.

Oh, we did kill a big snapping turtle out of our pond this weekend. They can really put a hurting on a fish pond. Since our pond isn't really big to begin with, we had to get him out. We did. All is well with the fish world.

So see, nothing going on here this Memorial Weekend. Just coughing. Oh, by the way, Hubby felt bad for laughing at me, so he milked the goat that night. He's slowly getting out of the dog house.

When I Was Young

You know, when I was young I looked forward to sneezing. It was fun! It felt good! It was a release! Now, when I sneeze, I just hope I don't pee my pants.

It's been a really busy weekend. We FINALLY got to plant our garden. It had quit raining for a total of 3 days! We tilled and planted all in one day. The back of my legs are so sore!!!!!! lol. As I was bending over and planting the onions,(I know, a little late) Hubby started laughing.

"What's so funny?" I asked
.
He told me that if you are ever lost in the wood, and you come upon a woman planting the garden, you can always tell where the road is.  Her butt will always be pointing towards it. WHAT?

I thought he just made that up since my, "cough", plumb bottom was pointing towards the road. That was until we had to go into town and I noticed that EVERY time there was a lady planting the garden her bottom was pointed towards the road! What the heck!!!!!! LOL!!! Ladies, next time you plant your garden, notice which way you point your bottom. Hubby was right! (Don't tell him I said that.)

Anyway, yesterday I went to my parents house to wash my "good clothes." Our water is not real good at getting clothes clean. It comes out red. I don't know if it's iron or clay. Either way, it doesn't work really good on our clothes. So, as I am washing my clothes, me and Mom will usually sit on her porch and swing. It was great. The sun was out. The breeze was blowing. It was just perfect. As we were sitting there, I took my shoes off to let them have a little sun. Well, a little sun turned into a lot of sun. So now I have sun poisoning on  the top of my feet. THEY ITCH LIKE CRAZY!!!!!!!!! I have had poison ivy not itch this bad. If I didn't need my feet to walk, I would scratch them off. If truth be told, I'm still thinking about it.

So I am asking, no, begging you for home remedies to help stop the itching. Please blogger buddies! Please help a poor friend out!!

I had an extra day off of work this week. And since it was raining outside( imagine that), I decided to clean my house. So I cleaned, and I cleaned, and I cleaned. It looks so nice and CLEAN! And do you know what happened? Nobody came to see me. NOBODY! I wanted at least someone to see that it was clean. Every time I get company my house is a total disaster. EVEY TIME! There will be every glass that I own in the sink. Dirty pots and pans on the counter. Mail falling off of the table. And clean, folded clothes, that I haven't put away yet, on the pool table.( At least they are folded.)

And, it's usually not just one person that sees it dirty. It's like someone decided to start a parade outside and didn't tell me that my house was on the route. People that I haven't seen in years will some how decide that THAT is the time to come and see me.

So I have decided, if I want to be left alone, I should keep my house clean. If I want company. Mess it up. It makes since.

As you all probably know, this is Mud. We all love Mud. She has a.....well..... personality all her own. Around here we call it the "Window Licker" personaity. 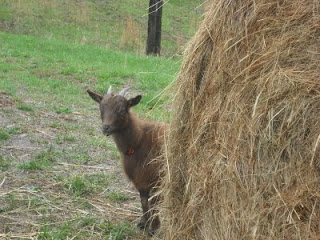 Remember that kid, in school, that would lick the frost off the windows in the bus? Very cute, but just not "all there." That would discribe Mud's personality. We are going to put up electric fence inside our woven fence. Not for all of the other goats. No, they get that they are not suppose to stick their heads through the fence. They will get caught. Not Mud. She was too busy licking the windows to listen to the lesson on not sticking your head through the fence. I have to go out at LEAST once a day and get her head back in the fence. Once her head is back in, she just goes on and acts like nothing happend. 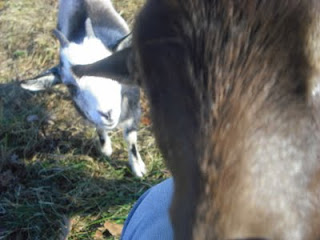 I just hope she doesn't try to lick the metal fence posts this winter.

I didn't realize how long it had been since I had last posted. Wow! I could use the excuse of Blogger being down, but that would be lying. hehehe. We have been diving into the worlds of goats. We are talking to goat farmers and extension agents. We are visiting web sites, and we are making plans on top of plans.

First off, I'm going to have to keep working for a little while longer. I'm going to work as many hours and do as many nails as I can. We are going to need that money starting out. As the farm/business grows, then I'll have to quit and work just on the farm. It can't be too soon for me. lol.

We have joined a co-op for goats. A bunch of small farmers get together and sell their goats to a butcher in Columbus. That way we don't have to worry about the market as much. We have also decided to sell breeding stock for replacement goats. We are thinking about Nubians, since people are crossing them with Boar bucks to produce meat goats. The Nubians make good moms. They have such a high amount of butterfat in their milks, the babies grow faster. But of course, we are still up for suggestions on what kinds of goats to raise. lol.

The next time we are out to the house of the lady that has started this co-op, I'll take some pictures. She has a really NICE setup. And, you can tell she cares for her goats.

So that is some of the things that have been happening around her. I'll try and keep you up updated more often. That is, if blogger doesn't go down again. lol

So unil next time,

Me and Hubby have been kicking around the idea of getting into the goat business. We had an "issue" with the bull and him wanting to kill the four wheeler about a week ago. Don't ask. So, we got to thinking, a 200 lbs billy would probably be easier to handle than a 2000 lbs bull. Don't get me wrong, we still want to keep a couple cows for our own calves to eat. But, we would just "borrow" the neighbor's bull. lol.

Before we just jumped into getting a million goats,(okay maybe an exaggeration.) we are looking into what kind of goat business we want to get into. Do we want to go for meat goats or, do we want to go for dairy, or, maybe a mixer of both? Anyway, we are studying the markets. We are asking people their opinions. We are learning about different products that goats can be used for. You know, just checking on if it would be worth the money invested to get into the goat business any deeper.

One of the things I did was call the extension agent here in our county. I heard she was very knowledgeable about goats. But guess what, she was on maternity leave. The nerve of her! lol.  So I called 3 more extension agents from 3 different counties. All were busy and would have to call me back.

When he got on the line he was nice enough. He, at first, was trying to act like he knew what he was talking about. That was until I started asking him questions. He kept back peddling on his answers. Then after a few minutes he declared that he was more knowledgeable about plants instead of animals and that I should call back next week and talk to the extension agent. Well, that's what I wanted to do! Thanks for wasting my time. I understand if the man didn't know anything about animals. But, don't tell me you do when you don't. Oh well.

Now I'm going to ask all my blogger friends out there who have goats or whoever wants to put their two cents worth in. Would a goat farm be worth investing money in?

I did it!!!! I made butter! I'm soooo excited! It's hard to separate the cream from the milk in goat's milk without a separator. But, if you let the milk set for a while in the fridge, some cream rises to the top. And, with that cream, I made butter. A whole cup! LOL! But hey, it beats paying for it in the store. Next on the list, cheese and soap. Anyone have recipes for anything else that involves goat milk? hehehehe

p.s. I would have had pictures, but I made homemade dinner rolls this evening. Well, we had to put butter on them. Now the butter is not that pretty. hehehehe
Posted by small farm girl at 9:29 PM 15 comments: