If you had a million dollars, would you live the same lifestyle that you live now?

Hubby hasn't heard anything about the local job yet. They told him they were accepting applications until this Friday. Then after they get the apps, they would call him. Hopefully everything will work out.

Right now there isn't really much he can do around the farm, at least not outside. It has rained so much around here! The garden is a big soup bowl. I hope it starts to dry out some. I hate to say that, because it seems like every time we start complaining about it raining too much, we end up getting a drought later on in the year. Then, we are begging for rain. Humans, we can never be satisfied. lol.

The rain IS good for hay though. We should have a good crop this year. That helps out a lot!!!!!! Not just for us, but for people that have to buy their hay. Prices tend to go down when there is a lot of rain. Plus, if we have extra, we can sell some of ours to other people as well.

People ask me what I have been doing since Hubby has been out of town during the week. Can you say CLEANING!!!!? Why is it that when your husband is not at home, you can get sooooo much cleaning down? Don't get me wrong, I would rather have a dirty house and have him home. But, WOW! I have cleaned places in this house that haven't been cleaned forever. It's starting to look like a normal house again. LOL.

I'm even losing more weight now that he is not here. It's okay to just eat veggies. There doesn't have to be a big meat dish to call it dinner. LOL. I had better watch, he will come back to a small wife and then he won't want to go out of town to make money. LOL!!(Just kidding Honey!)

But, my biggest fear with him being gone, is something will happen to the cows(getting out) or the new house (storm damage or fire). Let's just pray nothing like that happens. I'm just a worrier. Hubby always tells me to quit worrying. But, that's my job, that's what I do. LOL

Since Hubby came home this weekend, we got a lot done around the farm, but not enough. We are going to have to figure this time thing out. But, since he went back Sunday, I feel a little bummed out. So,I though I would right a poem about love.


Love, it is like a blossom.
If you want your finger bit, stick it to a possum.

A few months ago I thought that I might want to get a fiber animal. You know, try to spin my own yarn. Not that I knit anything. I don't even know how to knit. But, I think one day I might learn. lol. So I thought I wanted a fiber animal. This is NOT what I was talking about. 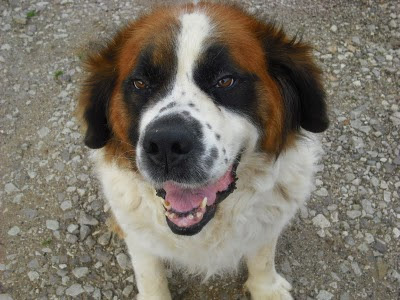 I mean, come on! Look at all of this hair!!!!! This will happen at least 5 more times this summer. He has soooo much hair. 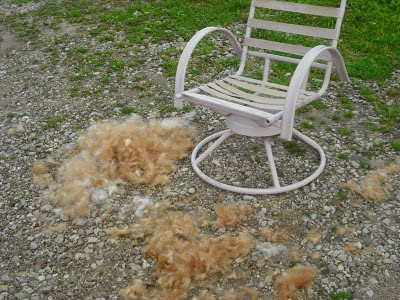 "You know you love me. Even though I shed." 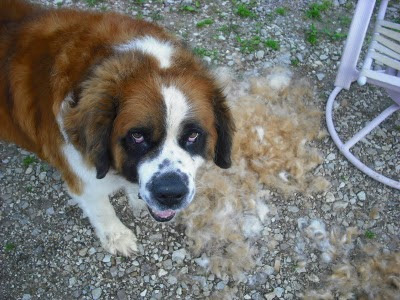 Ya, I'm afraid I do. Anyone want some dog hair? 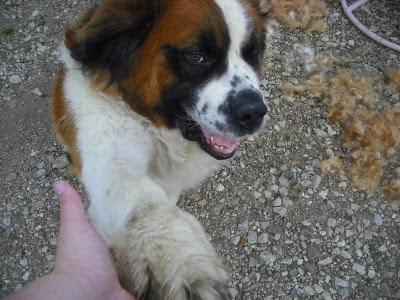 Hubby has been working out of town the total of 2 days when I get a call. The call was from a company that Hubby has been trying to get a job at for quite some time. They wanted him to come in and fill out another application. ( I know, I don't understand why either.) They also asked if he could drive a forklift. Of course he can. As he puts it, he can drive anything with wheels. LOL!!!

Anyway, Hubby had to come back home tonight so that he could turn in an application tomorrow. Then make the 2 hour trip back up to Columbus to go back to work. That is, unless they want him to have an interview or take some tests. This job would pay more money and he would be home. I hope he gets it. Although, I don't think he would like it as much as the job he is doing now. If the job that he is doing now was at home and paid more money, it would be the perfect job. From the sounds of it, they work hard all day, but they have fun doing it too. Oh well, priorities.

So everyone wish him luck. I'll keep you up to date on this. Oh another thing, this job actually pays enough to where if I really want, I could quit MY job. That is, if I want.


So until next time,

Meet the new addition to my Mom and Dad's household. This is Banjo. 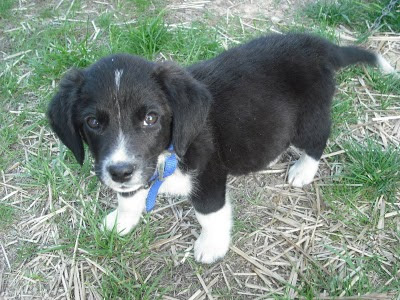 Banjo was given to my dad. We think he is a border collie. He is the new apple of my dad's eye. This is the man that,"didn't want another mouth to feed," when I offered to get them a dog for Christmas. He has fallen hard for this little ball of fluff. Can you blame him? 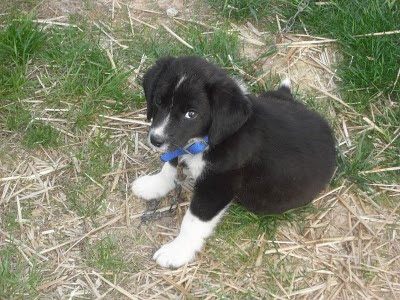 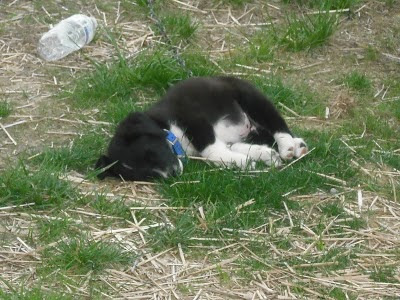 For Mother's Day a bunch of my family decided to have a luau party. The day before Mother's Day was 90 degrees, so why not? Well, it ended up being cold. It was 55 degrees and windy. Burrr! The party was held at my uncle's house. Actually his cabin. A small cabin. There were so many people and so much food all stuff in a little cabin. It was sooooo much fun! Laughing and singing and playing music. Here is a picture of the adult(except for the baby.lol) women that were there. For the first time on this blog. I have a picture of me on here. But, you'll have to guess which one I am. LOL!!!! I'm so devious. Hehehehehehe 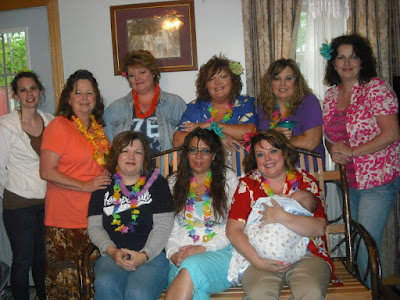 I promised you guys some pictures of the flooding around here this weekend. Here are some pictures that we took when we were out driving around during all of the rain. I know we were suppose to stay home in our dry house. But, it was too tempting and I'm too nosey. LOL


This was one of the houses that we past on our drive. See that pretty waterfall? That's that guy's bridge. 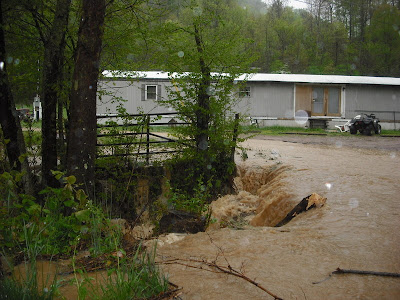 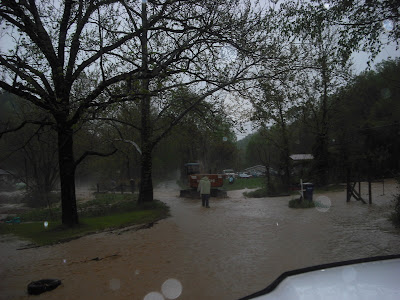 I hope Frank has a boat. 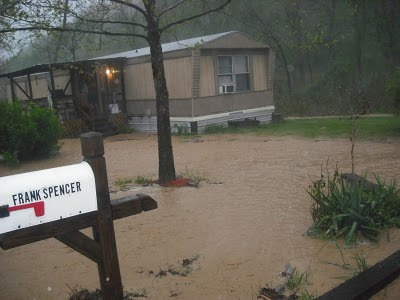 Now this is in front of Hubby's step-sister's house. See that metal thing there? That is a huge tanker car from a train. They converted it to a culvert.(Say that 10 times.) 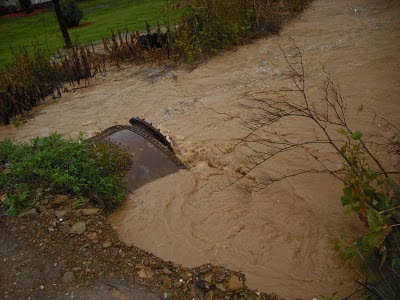 Here is the other side of the culvert. 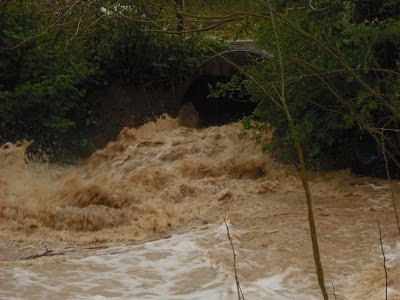 Now, this is what it looked like just 1/2 hour later. Can't see it can you. 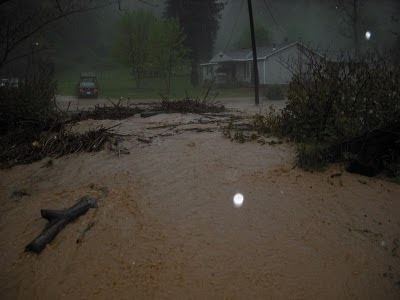 The next day we went back out just to see what the water had left. This picture was taken at the same place as the last one. Look and compare. See anything different? 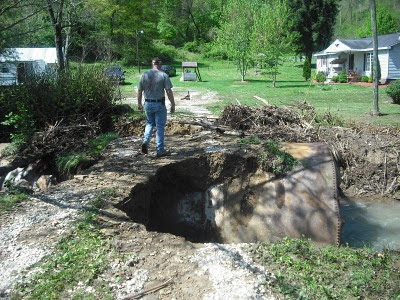 You don't really realize how big it actually is until Hubby gets close to it. Told you it was huge. The water that runs through this culvert, usually is just a trickle. You can tell the water is still up some. 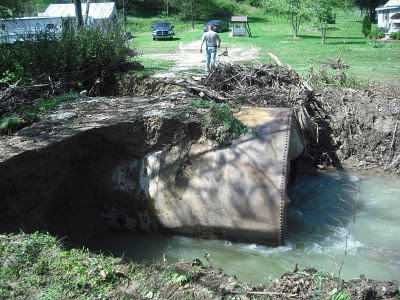 This is what use to be a bridge. 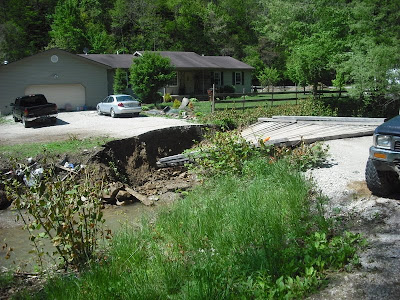 And, this is what use to be a road. The electric company was cutting a tree that was leaning on a line. This picture was taken in front of Hubby's Dad's house. 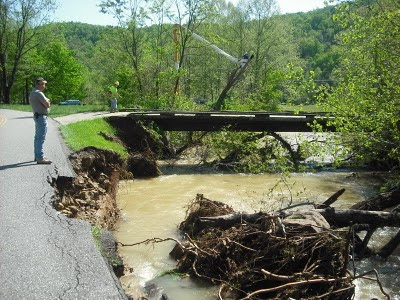 Now after all this rain, this is what Mother Nature left for us to admire. It was like she was saying,"Ooopps, sorry about that." 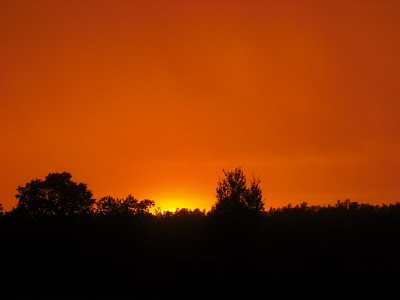 I had to get another computer. Now I can't figure out how everything works. Our other computer just up and died. Bam! I also (I think)lost a lot of pictures. I'm hoping a friend of ours can retrieve the pictures. Fingures crossed. Luckily, I have some pictures of the major flooding that has happend this weekend.

Hopefully now that I have a good computer again, I'll be able to blog more. Not just once a week. You guys will be tired of reading about my boring life. Lol. So once I figure out how to down load pictures on here, I'll post some of the flooding.

Oh, you ask how we paid for the computer? HUBBY GOT A JOB!!!!!! He will be going to Columbus to work for Crazy Cus' husband. He will be gone during the week, (Bed to myself!!!!!) and coming home on the weekends. Maybe even coming home once during the week. It's funny though. As soon as he got this job, 4 more people wanted him to work for them. All the other jobs though, are just temporary. Where were these jobs when we needed them?

Anyway, it seem's like things are starting to look up. I see the end of the tunnel. (Or is that another train?) Hopefully things will start falling into place now. I feel a big weight come off of my shoulders. Thanks everyone for your nice comments. It let's me know that you care. LOL