Have you ever smelled the breath of a St Bernard that just ate a nest full of rotten eggs?

Labels: Question of the day

Hi guys! I know I haven't posted on here for a while. We are soooooo busy! We're trying to get into our new house. Well, at least into the walk-in basement. Our old house won't last another winter.(At least I don't think so. lol) We have been working into the late hours of the night. We are almost there.

This cool weather has been so nice. I could live like this forever. Ok, maybe not forever, I've got to have garden. lol. I just love the way the crisp morning feels. I also love the smell. Have you know noticed the smell of fall? It's the smell of leaves and mud. And then, when I smell wood smoke? Be still my heart! I know, I'm weird. lol.

Well guys, sorry this is so short. But, I've got a house to move into.

P.S. Pictures of the house to come soon!
Posted by small farm girl at 9:14 AM 6 comments:

When you see pictures like this picture, you would assume that whoever is taking this picture would be at an airport. 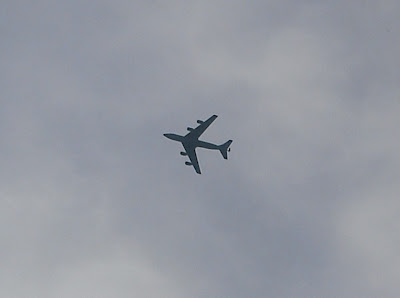 Aaaaahhhhhhh,no. THIS picture, of an airliner, was taken in my front yard! This picture was taken with just a point-and-shoot camera. No special effects or nothing.It was really THAT close to the ground! What is really spooky is this airliner circled our house 3 time! 3 TIMES!!!!!In the back of my mind I was thinking about 9/11. Was it going to happen again? Not that a terrorist is plotting on blowing up MY house. I'm not THAT important. lol. We have a uranium plant,chemical plants, and many good places to bomb within a 50 mile radius from where we live.

I did find out later that there were tornado warnings for Columbus. I guess the airport was having this airliner circle until the storms were over. They have never done this over OUR house before, but, I guess there's a first time for everything.

Now that that excitement is over, we have been very busy around here. Butchering chickens, making apple butter, cleaning our new house so we can move into it. Yep, very busy. I'll try not to use that as an excuse to not blog. lol

You heard it right. Hubby got FIRED! (Well, perminatly laid off) And to top that off, they wouldn't tell him why! They told him that they would not fight his unemployment benifits so they wasn't going to "get into" why we was "laid off." Our guess is when he took a day off to go for a job interview, they didn't like that. The thing is, 6 other people went to the same job interview. They didn't get "laid off." The only difference is, Hubby (we think) got the job! Once again, you heard right, HUBBY GOT THE JOB!!!!!!!

Yeaaaa Hubby!!!!! The only thing we are waiting on now is his physical and back ground check. (No problem, as far as we know. lol) They said it would be a couple weeks before they would get in contact with him. Once he passes his background check and physical, Hubby will be taking a trip to GA for training. He will be down there form anywhere between 8 to 12 weeks. That's going to be the hard part. I know there are a lot of you out there who's hubbys are gone for longer. But, I'm not used to that. I mean, who is going to kill the big spiders? lol.

Before he gets called to GA, we are going to try to get into the basement of our new house. (Yes, I know, we are BUSY around here!) That way, when he is gone, I won't have to worry about falling through the floor in the bedroom, or the wall falling in, or the electric causing fires.(Need I go on? This old house is in bad shape!)

So many things are changing around here, and many things are staying the same. Today, I'm making apple butter. Tomorrow, we are butchering chickens. I was going to butcher them a few days ago, but, I just couldn't swing the axe. lol. So since Hubby is laid off(fired),he is going to be the official axe swinger. Me, I'm a wimp. But, I'll be doing all of the cleaning and prepping. See, I'm not all useless. heheeheehe.

Hey everyone! How's the weather where you are? It's wonderful here! Sunny, no humidity, and in the mid 70's. Talk about perfect.

Hubby has a job interview tomorrow. If everything goes right, he will have a really great job! Here's crossing my fingers.lol. If he gets this job our financial standings will improve tremendously. Hubby even told me that if he gets this job, I can quit mine and be a full time homesteader. The question is, do I want to quit my job. I know, he hasn't gotten this job yet,but I'm a "what if" person.

Would I like being home all the time? Would I become lazy? Would I actully do the things that I keep telling myself I don't have time for? Would I miss sociallizing with people as much? Would I spend all day on the internet? lol. These are the questions that I keep asking myself. And yes, I know he hasn't gotten the job yet. :)

You might say, "Well, just work part time." I only work 3 days a week now. You can't get more part time than that. We figured out though, it cost me more to go to work than what I make. That's not good. But, I'm still wondering. Part of me wants to stay home, but another part of me says to keep working. It's just 3 days a week.

I figure I would toss that question out to you all to see what you would do. And yes, I know he hasn't gotten he job yet. lol

The good news is......the fire is out. The bad new is, our tractor caught on fire! Hubby was bush hogging for our neighbor, Firebug. He was going under a tree when a limb hit the muffler on top of the tractor. The limb knocked it almost all the way off. Hubby, being a top notch welder, thought he would just weld it back on. No problem. What he didn't take into consideration was the build up of years of hay and seeping diesel. Yep, poof, up it went.

I was in the kitchen doing dishes(again),when I heard Hubby yell for help. He was dipping water from out of the cistern and pouring it on the tractor. I grabbed a bucket and started to get water to help too. Luckily, it didn't take much to put out. We were also lucky that there wasn't much damage. One fuel line had a small hole in it. That was it! It shouldn't cost much to fix it. It could have been soooooo much worse. Now THAT'S the good new. lol

Another thing that has been going on around here is it is chicken killing time. I hate to do this part, but I understand it is all part of having a homestead. Plus 36 chickens are just too many. They are out growing their coop. So we are going to take them from the coop to the freezer. Yummmmmm. Chicken and dumplings! Ok, I don't feel as bad now. hehehehehe.

Speaking of freezers, mine quit working. Yep, gave up the ghost,kicked the bucket,went to the little freezer house in the sky. How did I find this out? I found this out when I couldn't remember when I had heard the freezer running last. You see, we have 2 1/2 freezers. The one that died wasn't used that much. I did have 1/2 a deer and some veggies in it. Now it just has maggot soup. EEEEWWWWWW!!!!!!!! Luckily it is on our front porch.(Yes, that makes me a redneck.) We are going to pick it up with the tractor and dump the contents in the back field.The coyotes will be happy. lol

Do NOT rub your eyes with the same hand that you applied Vick's salve with.
Posted by small farm girl at 5:29 AM 11 comments:

Labels: statement of the day

I haven't said much about my goats lately. The main reason is they aren't at my house right now. Since this summer was so hot, we kept the goats down at Hubby's dad's house. He has a bigger barn and lots of weeds that the goats love to eat. But........we have a small problem. The horses. Hubby's dad has two horses that live at his farm. They have taken up with the goats. Now in a perfect world, everything is suppose to get along. It sounds like the horses and the goats being friends is a good thing. It is! It's just....they are more like partners in crime.

You see, the goats have the run of the place. They go through fence like there is none there. Of course, barb wire really wasn't made for goats. lol. We don't care that they go through the fences. They can't hurt anything. It's actually kind of funny to look out in the backyard and see cat size balls of fur eating until their bellys look like they could pop.

So now ask what my problem is. Have you ever tried to out run horses!? They are protective of those little boogers. lol. This could be interesting when we try to take them to our house this fall.

Now another update. I lost 5.4 lbs this week. And that is going to 3 cookouts this weekend. Maybe it was all of the running in the horse pasture. lol