The garden, this year, is a bust.  Not that things didn't grow.  Ohhhhh noooooo!  Things grew great!  The deer were very happy that my tomatoes grew great!  They thought they were tasty too!  We haven't had one red tomato out of our garden. (not counting the cherry tomatoes) The deer eat them when they are green.  We haven't been able to keep them out of the garden.  The deer also ate the beans.  It's a bad time for us to fail in the garden area.

It's getting scary out there folks.  The world is one big powder keg getting ready to blow.  I feel it could happen at any time.  The things going on over seas are one thing, but the things happening on our own soil is something else.  The "feel" is just not right.  No respect for anyone or anything.  People are not respecting authority and authority is not respecting the people.  It could get ugly.

In fact, I was told by Country Girl, that there are rumors going around about something called a "Purge" here in my own local city.  If you have never heard of this, it's where people will do anything that they want for 12 hours. Looting, stealing, burning, raping, and possibly murder.   It could get bad.  This "Purge" is suppose to happen on the 30th of this month.  We shall see if anything actually happens.

It's times like these, when I hear all of the stuff going on in the world, that I look at how I could improve on being prepared.  I have a job now, so I have to think about what I would do if something happened while I was at work.  I'm sure most people have thought about the same thing.  It's just coming more to the front of our thoughts when we see what's going on in the world.

It's that time of year.  The time of year when we don't even have time to breathe.  Work has been taking up so much more time than I was wanting it to.  I've been working full time but I'm considering going down to part time.  That way I can have extra time to work on the garden, house, and just farm "stuff" in general.

I'm also still working on writing.  I'm just getting the "beginning" of things going on that front.  I'm soooo excited about this opportunity!  It also has put a torch under me to try writing for other magazines.  Why stop with just one???  hehehe.

On another good note, we've been really taking care of our health.  I've had soooo much more energy since I've started eating right and exercising more.  My knees have felt better than they have for years.  Now the challenge is to keep it up. This extra energy is pretty addicting, hopefully I can.

Hubby will be cutting hay this weekend.  Hopefully we will get a few days together that are rain free.  It's not that we've gotten much rain, we need more.  We've been getting just enough to not cut hay.  The weather forecast is for a few dry, sunny days together, so as of right now, hay will be put up this weekend.  We already have it sold so that will be extra cash in the pocket.  And I don't know about you, but I can ALWAYS use more cash. :0)

Hershey, the calf, is growing very nicely.  She's getting bigger and bigger everyday.  That little one is going to be a massive cow.  She has shoulders on her like a bull!  Maybe I should post a picture of her on here again.  I can get much closer to her now.  She's not as scared of us as her mom.  That's a good thing!

I'm also considering getting rid of the rabbits, again.  I keep missing the dates that they need to be butchered and then I end up with gigantic rabbits that are too big and tough to taste real good.  They are costing us more money than they are worth.  Sure, I could raise and sell them, but then I have to have time to put them on the Internet and wait for the buyers to come.  My time, right now, is something that I have to be really picky about.  If it's not something that I REALLY enjoy, I'm not going to mess with it.

I'm actually going to try and cut back on all the stuff we have in the house.  We live in the basement, but we still have a lot of useless stuff that we have brought in.  I mean seriously!!!!  We don't NEED all this stuff!!!!  It's just cluttering up space.  And right now, I enjoy the space more than I enjoy the stuff.   Maybe I should have had this mindset when I was bring all this stuff into the house to begin with.  Oh well, time to start pitching.

P.s.  I just told my boss that I will be going down to a part time position.
Posted by small farm girl at 3:47 PM 4 comments: 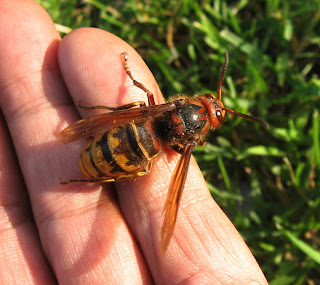 These little buggers (or should I say BIG buggers) are taking over my garden.  These are sand hornets or cicada killers to others.  Sure "They" say the sand hornet is docile.  I'm not going to press my luck.  "They" say, that only the female has a stinger.  Once again, not going to press my luck.  I can't even go into my garden to pick vegetables without these things making fly-by passes of my head.  Nope, not gonna press my luck.  These are MY veggies!!!  As much as I don't really want to kill these things, I was told that if I don't, they can take over a garden in no time.  Which they have.  So it looks like we are being invaded, once again, by some sort of pest that I have to fight off for our garden.  It's getting kind of hard to eat from our garden when everything else wants to also.

P.s.  That is not me holding that hornet.  That is a picture I took off the net.
Posted by small farm girl at 2:21 PM 8 comments: