As I write this I have a cat sitting on my shoulder.  How come no one told me about cats liking to imitate parrots?  I have to admit, I'm kinda attached to this cat. I never thought of myself as a cat person but, I really think I am. Now, don't get me wrong, I like my dogs, but I REALLY like my cat. He doesn't have to follow me around the house all day.  He doesn't have to beg to go outside to use the bathroom. (Although if his litter box is too dirty he does kind of complain. And if I don't clean it out, he goes in the ashes that we keep in a pan by the stove to be taken outside.) He actually sleeps most of the time. But, when he isn't asleep, he plays HARD. 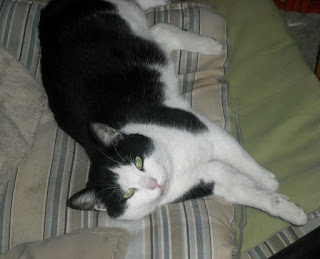 It's nothing unusual to hear what sounds like a car shifting gears in our house. It's just the cat running from one place to the other.  I think he thinks that if he makes those sounds he can go faster. And since we have a concrete floor, all of his spinning of his "back wheels" wears down his back claws. Which is good because he likes to use them when we are playing.

Another thing I like about this cat is his ability to not have the same schedule. You don't know what he will be doing from one minute to the next or where he will be sleeping. So not like our dogs! One night he will sleep by me.(On top of the blankets.) One night he will sleep by Hubby. Some nights he won't even sleep by either one of us. He will just sleep in the window sill. But what's so nice is he DOES sleep at night.

Well, I didn't really want this to turn into a cat post. lol. I was really going to tell you about our new foal.  I still haven't gotten close to him. Yep, you read right. We now think it's a HIM. Oh, he will be fixed. I don't want a stud horse around here. That's what caused him to begin with. lol. We still not sure if we are going to keep him or not. More than likely not. If we get a new horse around here I would want a draft horse. Not a big one, more like a Fjord or a haflinger. Something short that I could ride if I wanted to. But it will be something that can pull a cart or a plow. You never know when the tractor doesn't work. lol.  No, I always thought I would want a horse that could pull a cart or buggy. Nothing fancy at all! I want, what some people would call, an old plug horse.  If I ride it, it's going to be at a walk. My body is not made for speed. lol. 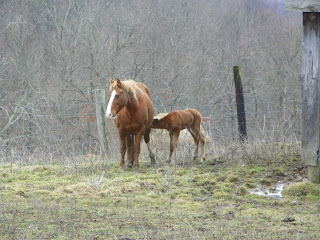 I'm also thinking of starting some seeds here pretty soon. Not really sure where I'm going to put them though. When you live in a basement, you don't get a whole lot of sunshine coming in. I could put them upstairs in the upper part of the house, but I wonder if it would get to cold for them.  It doesn't freeze up there, but I don't know if it gets warm enough either. We will see.

You can NEVER talk too much about cats!!

I never though I was a cat person until I got one. Even though we've almost always had dogs, I still prefer the cats to dogs. The cats aren't always in your face or needy like the dogs are and I like that. And I love to go to sleep by the sound of purring kitties!

Our cats think they are dogs, always wanting attention and talking to me. At least they don't want to go out! LOL!!
A smaller draft horse would be cool!
I have seen a couple of posts lately about winter sowing where you actually start seeds outside in milk jugs or some such thing. It might work for you with your limited space and sunny windows.

I love the way you write. Your cat reminds me of my Bickett. I could write a book about Bickett (if only I could write!) Your new foal is beautiful.

I like cats too. Much like what one person said in one of the Anne of Green Gables books.

"Dog's are too good, but cats are wonderfully selfish!"

I love my golden retriever but he is all good. It's fun to watch are cats "get up to the devil" sometimes.

Hello, I just found your blog on Muffy's Marks. I have to tell you I love the farm life! Although, I think I might have been drawn to the pic of your cat in the post, because he looks so much like my Tuxedo, Miss Kitty... these cats are very smart! Speaking of sleeping...they never sleep in the same place each night!
Oh, I can go on, but not enough space. I'm joining/following your blog now, and invite you to stop by and join/follow us too. I would love keeping up with your farm life!
Here is the Blog:
http://shespoketome.blogspot.com

We are also on Google+ if you care to follow us there too! I am so excited and look forward to meeting you and your buddy.I would love having him on my blog! Take Care...

Well that was a lovely post small farm girl ! And we have a parrot that acts like a cat , much to our cats displeasure. We also have miniature driving horses ... one looks like a tiny draft. You should pop over for a visit some time , we'd love to show you around ;)

Jessica @ Barefoot by the Sea said...

Newest follower. I love your blog and I love to hear about the desire to live a farm life. I grew up in MA and was surrounded by farms. Now, my own home in NH is on a small piece of land but I'm determined to grow veggies and maybe some day have chickens and goats! Would love for you to come follow my blog too!
Jessica
www.barefootbysea.blogspot.com