We have horses. We have three horses. Two mares and a young gelding. The gelding is from one of our mares. So, when he became 6 months old, we weaned him. We took him to Hubby's dad's house. Hubby's dad has an older gelding,named Red,(original huh) that we thought would get along with Scout, our young gelding. Anyway, Hubby's dad took Scout and Red to a place where he has 3 other horses. A few hundred acres on a few hills. You would think a horses dream. Land to run on, with no humans.

These horses have been there for a while. Scout is now 2 1/2 years old. We worked with him before we put him on the hill so he would be easy to catch and lead. We thought these horses were being taken care of. We are going to break Scout to ride soon, so we decided to go and check on the horses. Imagine our horror when we saw this.... This is Red. He was a show horse. When he left our farm 2 1/2 years ago, he was so fat he could have stood to lose about 100 pounds. We is an old style Tennessee Walker. He is suppose to have large round hind quarters and a thick chest and neck. He sure doesn't have it now. This horse was starving to death. These pictures don't show how thin he really is. I plan on getting better pictures to post on here later. 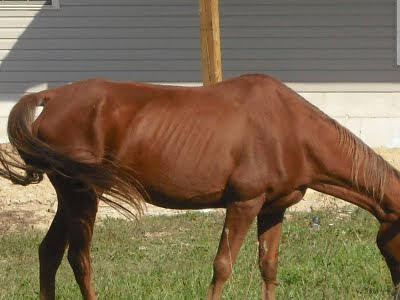 And Scout,(once again you can't hardly tell in this picture)he has lost a lot of weight too. With him being a younger horse,he was in better shape than Red. But, He can still stand to put on at least 50 pounds. 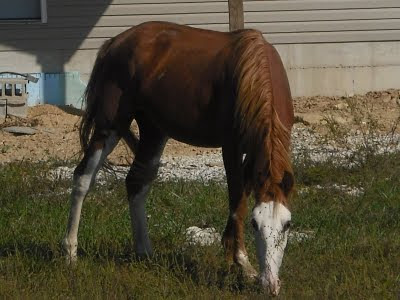 Right now, I'm mad. I'm mad that anyone could let horses get in this bad of shape. We thought that Hubby's dad was taking care of them. Guess not. Looks like me and Hubby have two projects on our hands. It's a good thing we saw them and brought them home before it got worse.

To be honest with you,I've seen alot worse.I am not trying to give hubbys dad credit.He must of thought you could just throw him to pasture.So if you haven't seen him in two years,I'd say you were pretty lucky.Some people need to be more educated,and some should never have any animals.He will fatten up real quick,glad he is o.k.

Grass is natural feed for a horse. A few hundred acres of grass should have kept them very well.

Were they not let out on the grass as you expected? Or possibly, are they badly in need of worming?

I'm so sorry, it's awful to see them sickly that way.

I got very angry with my husband one time. He did not want to spend much money on feeding the horses, so he instructed the kids, behind my back, to feed them only one small flake twice a day, in the winter time. I went to check them about February, and was shocked that, even through their winter coats, you could see their ribs!

Needles to say, they had to more than make up for all the feed they'd missed for the next few months. sigh...

Poor fellas...were the other three that way, too?

Folks get funny ideas in their heads. Our small farm often would get rain just as the hay was curing & it would lose much of its nutrition & sometimes got mouldy. My dad would never feed this stuff to his dairy cows "they're delicate" but he would feed it to my horses, who, of course would develop a cough & get sick. I was so angry.

Hope you're able to help them, soon.

So Sorry for your experience. Sure glad you went when you did. How is Hubby's Dad? Has he possibly had a mini stroke or such that he may not be aware of some things? My husband and I have noticed that many of the cattle ranchers in this area may be having problems with money as Cows are skinny compared to last year and also having a problem with Coccidia. Wishing you the best and so glad the horses now have you taking care of them.

I agree with that second comment. Horses shouldn't get that skinny on grass. That much grass should have been plenty where you live, unless they had tons of horses on it, but it looked grassy in the background. I'd check and see if maybe they need worming, or something. How old is Red? They run down real easy when they are older. Keep us posted.

One thing we've learned is that grass doesn't always supply all the nutritional needs of animals. IN our area of MT, selenium, copper and cobalt are very lacking minerals. This is why you need to offer mineral supliments, the animals know what they need and will not over induldge. We put out white salt blocks, for salt intake and then use loose mineral and a lick tub. You'll need to check which is okay for horses verses cows, horses can't handle the urea in some of the lick tubs designed for cows. We use one that is for cows and horses. The lick tubs are mineral suppliment, mixed with molasses and put in a 150# or 250# metal tub.

Worming may be needed, take a stool sample into the vet and they should be able to look right there and tell you what you'll need. You also might have Reds teeth checked, floating may be needed.

As someone said above; older horses are harder to keep weight on.

PTL you checked on them and it wasn't any worse. One thing we've learned is that nobody takes care of our animals, like we do*wink*, it's because our animals eat better than we do.

I'd be some kinda mad too. Poor guys...I hope they are okay

I'm sure you were in shock at seeing your horses in such bad shape. Looks like your father's horse lost about 300 pounds. Your horse looks much better. Could be your dad's horse needs his teeth floated. Something you might check. The weight will pick up with some good grain and hay! Your horses at your house look nice and fat! What did your hubby's daddy say about the shape of the horses?...debbie

Even someone like me that knows nothing about horses can tell these horses don't look healthy...good luck getting them back and nursing them to better health...R Dean

Yikes! Did he ever worm them in the 2 1/2 years he had them over there? How about teeth floating? The grass looks pretty good, too. Better than we have around here, which is why I wonder about the worming and floating. Those can make a huge difference in helping a horse keep weight on. I'd be mad, too. How far away from you is that land that your gelding was on? Did you go check on him at all during those 2 1/2 years? If you could have checked periodically, then you might have been able to change the outcome before it got so bad.
Best of luck getting him fat and healthy again. Will you be riding and showing him after he is broke?