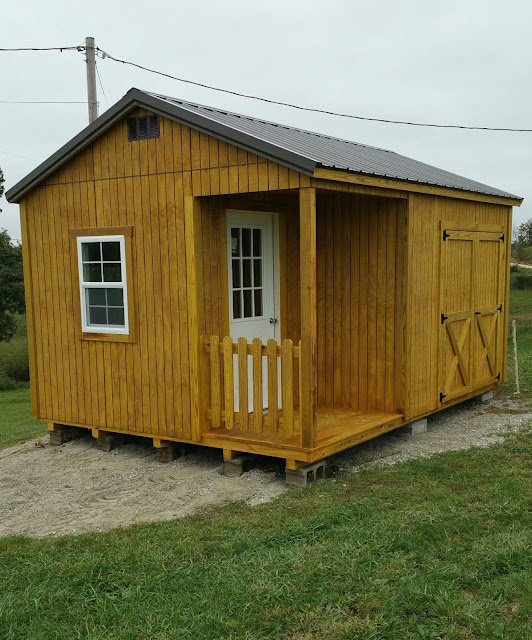 If you follow me on Facebook, you would have found out that I got this beauty last weekend.  I'm sooooooo excited!!!!  I've so many plans for this building!  Right now we're wiring it for electric and soon we'll be putting insulation and drywall up.  It's not as big as some of the other buildings we were looking at, but with a little planning, it'll be big enough for what I want to do with it.

See all that gravel around the bottom?  Well, it'll be gone soon.  We put that there so that they could deliver it easier.  We will keep the gravel that is under the building but move the gravel that's around it.  I want to be able to plant herbs and such there for later use.  Since we're still working on our house, I didn't have a place to plant herbs permanently.  Now I do.  Plus, I'll have a place to work with them on the inside.  Herbs, paintings, and well, anything else I want to do.  I have to keep tabs on what is going to be going in there.  It's not THAT big. lol

With the slow change in the temperatures around here, I have been baking like crazy.  I keep looking up new recipes on Pintrest. ( By the way, I have to limit my time on Pintrest.  I can waste a whole afternoon there and not even know it. hehehe)  If I find some really good recipes, I'll post some on here.  So be prepared to get fatter with me. lol

Another thing that has been going on around here is music.  I've been playing my fiddle at a few festivals and parties. I really enjoy playing that thing.  If you would have told me back in the fourth grade, how much I was going to like it later on in life, I wouldn't have quit taking lessons.  But of course, you couldn't tell "Fourth Grade Me" anything. lol

Well, I got to get back to doing some chores around here. They don't do themselves.

Im excited for you. I just love it! I want one too and intend to get o e built a little later after I move to mamas house.. There once was one back when I was a small girl ... Cant wait to see what ya do... Happy Saturday with love ps i get lost k. Pinterest too hehehe blessings

Janice, thank you for being excited with me!! And, I'm glad I'm not the only one who gets absorbed in Pinterest. hehehe

Woo Hoo! I know you will do something fabulous with it.

How fun! I can't wait to see what you do with your building! yes Pinterest can eat up several hours before you even know it!!!

Great! So excited for you. It will be fun!

This is gorgeous!! I feel your pain with pinterest!