A Fail And A Win 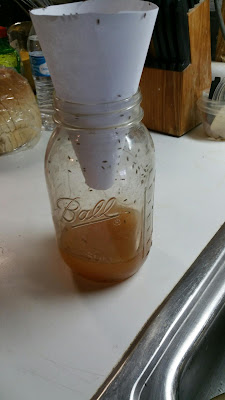 I took this photo with my phone. Not in focus....

I tried my hand at making apple cider vinegar.  Truthfully it would have worked but for one small detail that I didn't do.  You see, to make apple cider vinegar, you take some apples,(duh) or apple peels and cores, put them in a non-reactive container.  I used my new fancy, dancy fermenting crock.  You cover the peelings and cores with water, stir it around once a day for three days, and then let the concoction sit for about three months.  Waa Laa, apple cider vinegar.  Just strain and put into containers.

Sounds easy right?  Well, I left out one small detail.  When you put the apples and water into the container, you have to cover it well with a tea towel.  Then put a rubber band around it so that fruit flies wouldn't get in.  Yep, forgot the rubber band part.  I went and checked on my apple cider vinegar about two months into the process and YEEEEEEWWWW.  A swarm of fruit flies flew into my face.  Also, inside the container was a gazillion baby fruit fly maggots.  Double ewwwwwwww!

Well, I went and dumped the mess over the hill because it wasn't going to do me any good. When I came back into the house, you could hardly breath because of all the fruit flies flying around.  It would have made a great horror film.  Death By Flies.  Anyway, now I had to come up with a way to get rid of all those stupid flies, and I think I did a really good job.

I took a mason jar and put a couple inches of apple cider vinegar in it.  I knew those flies loved that stuff.  Then I made a funnel that fit down into the jar and came just above the vinegar.  The dumb little flies could get in, but they couldn't get out.  I bet I had hundreds of those little suckers in that jar in less than and half an hour.  No more breathing flies!

I may have failed at making the vinegar, but I sure did make a nice fly trap.  I guess you win some and ya lose some.

I didn't know how to make vinegar, sounds easy since you let us in on what not to do. Great idea to catch the flies.

My Keeper is not always as clean as he was in those photos on my blog! I had just spent several hours bathing and brushing him, getting him ready for the road trip we took LOL.. I wish he was that clean all the time!

If we didn't coop our chickens at night we wouldnt have a chicken left in 2 days tops! We were looking at chicken tunnels online this weekend. We have a very large fenced chicken corral we call it but they have eaten up all the greenery in there and would love to get out to the yard. So we are going to make a chicken tunnel that I can drag around and let them eat bugs, my hope is there wont be a cricket left on this place lol. Darn crickets keep me awake lol.