One Week With A Milk Cow (FAIL) 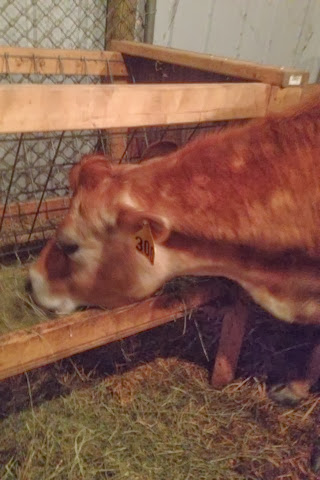 I have no place for her. Sure we have beef cattle, but as I found out, beef cattle and milk cows are really different.  Plus, I want them to be separated.  Our beef cattle are wild and sweet Annabell would probably get hurt being with them.  Plus she is going to have a calf in May and I would liked to get her use to us before she had it.

This is the Internet picture we were given of her. 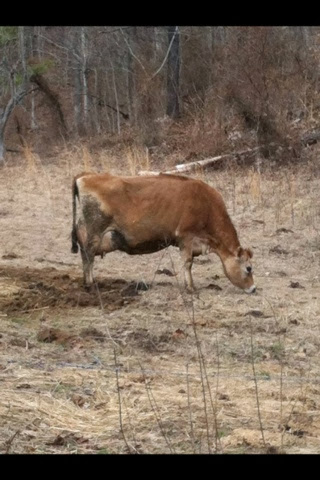 When we bought her, is was a "spur of the moment" buy.  I have been talking about getting a milk cow for some time.  We go through butter and cheese like crazy!!! But talking, was all I was doing.  We didn't have a place to put her, no place to milk her,and no place to get her in out of the weather.  Plus, once she DID have the calf, we worried about the bull getting to her because we didn't have a separate place for her to be out on pasture.  I should have thought about it a little more.  But, like I have said a million times, I like to jump into things.  That's one of the reasons I was going to take this year off and figure out what I wanted to do. ( That really worked, huh?) 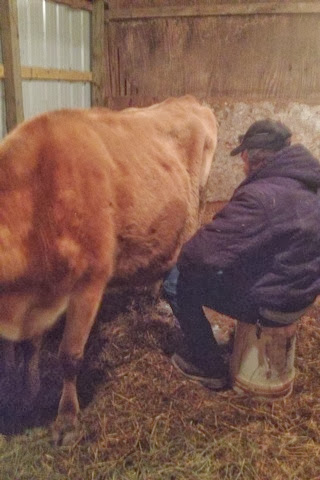 She was perfect though.  We didn't even have to tie her to milk her.  She stood still and endured our fumbling around.  While milking her, I found out that 10 years of doing nails had really damaged my hands and arms.  They hurt SOOO bad after milking her.  That would be something else I would have to get, a milking machine.

Whatcha doin back there? 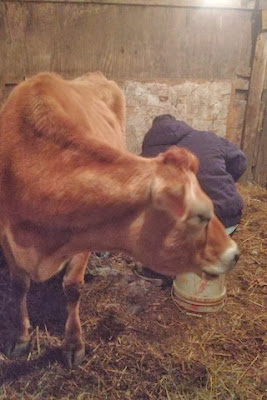 I was told that since Annabell was going to have a calf in May, it would probably be best if we dried her up.  Do you realize how many people have different ideas on how to dry up a milk cow?  I was getting different advice from at least 4 different people.  And of course since I didn't really know anything about milk cows, I was so confused.  I couldn't sleep.  Was I gonna end up hurting this sweet little girl?  I couldn't keep it up.....  So, although I hated to, I decided to sell her after one week.  I was just so over-whelmed.  It's my fault for jumping into this. I put her on the Internet and within one hour, I had someone call about her.

She will be going to a nice family who has owned milk cows before.  She will be their only milk cow and she will be babied like crazy.  I think this will be for the best.  The man that bought her, taught me a lot about Jerseys in the little time that we talked.  I'm going to be more prepared when I get another cow.

And, we will be getting another milk cow, just not right now.  I'm going to make sure everything is ready for one.  I'm going to do more research on breeds and milking machines.  I'm going to fix a place just for the cow where we won't worry about the bull getting to it. Things will be better, and I'll be able to sleep at night because I won't be worrying about the cow.  I think I learned my lesson.

It happens sometimes , we think we are ready , then we aren't and we worry ~ so best to let go of the worry . It is harder when an animal is involved in the worry but you found her a good home . As I always say ~ alls well that ends well. lol

Carolyn, the sad part is we didn't get much milk. We were drying her up. :-(

LOL sfg, don't feel bad about it. The amish rodeo milking event cow I bought learned me a bunch quick! You'll get it worked out and find another milk cow. Don't forget about looking at those maggidans milkers. Cheap, non electric and I can vouch that they work on cows!

It's so easy to "bite off more then we can chew". Doesn't mean we won't be able to chew it later, but homesteaders can be a very ambitious bunch. Sounds like you had her best interest at heart, and that's the important part. Have you ever raised milk goats? I would love to have a Jersey cow, but I know our land can handle the smaller goats much better (and so can I).

We jumped in at the deep end when we got our Jersey cow, because she produced an unexpected calf six months after we got her. We were totally unprepared, but somehow managed. We are always one step behind ourselves in regards farm management, mostly because we are renovating an old house at the same time.

I think that you are a very special lady to rethink your thoughts about owning a cow, keeping her wellbeing uppermost instead of your own needs, and I am sure that one day you will again have a go at keeping a Jersey cow. Vx