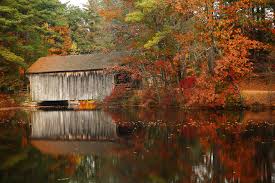 That's right! I officially have declared that Fall is here!!!!! It doesn't look like this around here YET, but it will soon.  In fact, we have a covered bridge that looks kind of like this one.  I think I'll have to get some pictures on here to show you all.

Anyway, back to Fall.  The days are warm, the nights are cool.  Perfect!!!!  The leaves are starting to get crispy and so is the air.  You know what I'm talking about.  It's like the air has been put through an air filter.  It's soooo much easier to breath. The frost weeds are blooming so I know that frost is just around the corner.  I guess it's time for us to start getting in the wood for winter.

Our garden is done, I mean brown corn stalks, done.  I thought about using them for a cute little decoration out in front of the house.  We'll see if I get the gumption enough to do it. hehehe.  I get a lot of ideas this time of year, but I have so much stuff to do, I just keep adding to the list.  Hubby's Dad has us a few rows of beans that should be ready soon.  I hope it doesn't frost before I get those canned up.  That's gonna help us a lot.  Stupid rabbits ate all of our beans.  We'll see if that happens next year.  I'm taking measures that it won't.

I'm also taking measures so that Jack wont be killing anymore chickens.  The chicken coop will be worked on this weekend!!! Yay!!!! I'm hoping it will get done soon, at least before the snow flies.  I would at least like to get some pictures of it on here when it's done.  My plan is to landscape around it.  That's gonna have to happen in the spring.

As I'm writing this post, I'm also thinking about the things I'm gonna miss about summer.  I'm gonna miss sitting outside in front of the house in the mornings and watching the pond.  That's my favorite thing to do in the mornings just before it gets too hot to.  I'm gonna miss going outside in shirt sleeves and not having to bundle up against the cold winter wind.  I'm going to miss the times that me and Hubby jumped on his dad's motorcycle and just rode around for a few minutes. (Yes, I know we still can in the winter time, but I'm not a winter rider.  I'm a wimp!)  I'm also going to miss the fresh veggies that we could get at the farmers' markets.  Although, we are getting some really nice apples right now!

I guess what I'm saying is, I love living in an area where there are 4 distinct seasons.  By the time I get tired of one season, it's time for the next.  So right now I'm saying, "Bring on FALL!!!"

Fall is my favorite time of the year, so I'm not gonna miss summer. There's lots to enjoy about fall: not sweating to death, cool mornings listening to the crickets sing, the last of the mosquitoes. Those are just a few. Yeah, Fall!

I totally agree with ya! Summers to hot, springs to wet... but that sweet bit of time between summer and fall is just perfect. Last year I refused to let summer go and was drinking my coffee out side in my night gown, layered up in sweats and a blanket. Why? Because I could.
Can't wait to meet up

I don't think it's quite here yet but boy I can't wait!