I'm Back and Additons

I'm back! I took off a couple of weeks just because we were getting overwhelmed here. The garden was really taking off. And I was trying to keep up. I wasn't doing a very good job. Then I was still trying to keep on riding for one of my uncles. Then I got talked (wrangled) into being the Quarter Horse judge at the fun shows that we have been going to at our local fair grounds. THEN on top of all that, my uncle, who I look at as my second dad, had a health scare. Whew! I'm tired just typing all of this.

Anyways, because of my uncles health scare he thought he couldn't take care of his goats so he gave them to me. (Thanks Uncle Bob!) So we had to find a place for the extra goats.

So, without further ado, I introduce to you the newest members of our farm. Not sure what their name's are, but I'm going to find out. If they even have names. They are a little skinning for my taste, so we are hoping to fatten them up a little too. 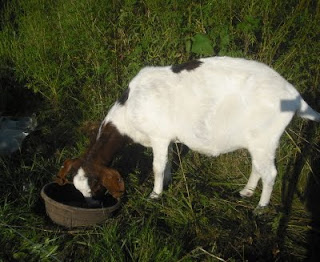 This lady is twice the size of the other ones. We are thinking she might be going to have a kid or two sometime soon. Or, she just run all of the little goats off so that she could eat their food. lol. Which would explain why they are a little skinny. LOL

Then here is the pride and joy of my uncle. Meet Fuzz Nuts. Yep, that's his name. He was named before my uncle got him. I'm actually thinking that's his name on his papers. I thought it was funny so I kept it. 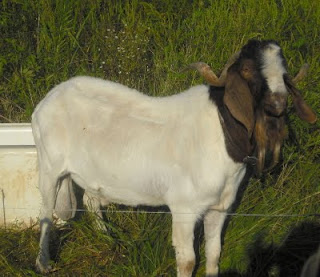 Check out those horns! Good thing he doesn't use them on humans. He's as docile as can be. But, I'm not going to take my eye off of him. hehehe 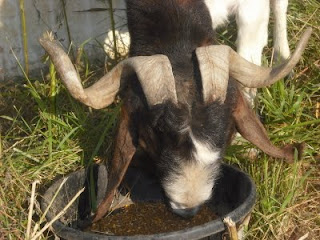 Another addition to the farm is this....Can you tell what it is? 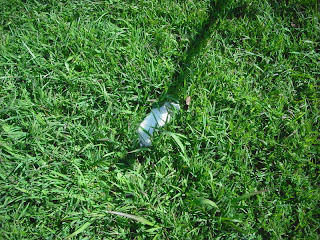 It's a small ball of cuteness is what it is! 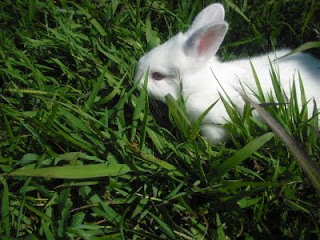 Louise, our brown rabbit, gave birth to two babies. One of them didn't live. It was twice the size of this one when it was born. It didn't even live an hour. I think that maybe something was wrong with it. 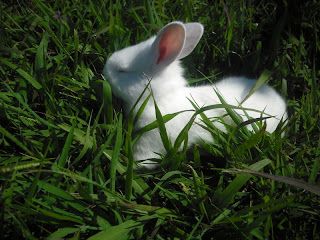 We don't even know what it is. It's too young to tell. It's either going to live on the farm as a breeder if it's a girl, or be sold if it's a boy. I'm hoping for a girl. hehehehe 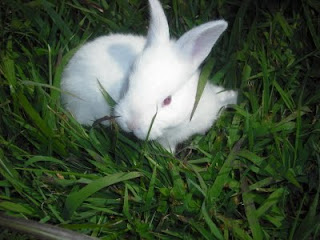 Here's one more shot of cuteness. 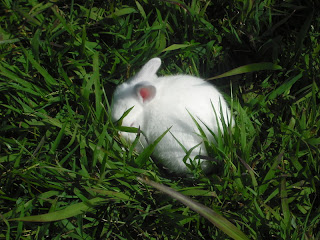 Small Farm Girl, back in business.
Posted by small farm girl at 10:34 AM

Congrats on the new critters.

Glad you're back & that farm life is good! Bunnies, goats, OH MY!

I wish we had a Boer goat. Still trying to talk myself OUT of one & try hard to find one for stud, but it doesn't look like that's going to happen. Don't suppose Fuzz Nuts would like to take a little "vacation" down in Arkansas, hugh?

Carolyn...He might not be ready for a trip to Arkansas, but he would be up for some company. hehehehe

Yup, had to take a week myself. It was kinda nice not having the blog hanging over my head for a few days.
Hey, did you get a chance to see the new addition to the Mini Farm? LOL I am still not sure about it or what I am even going to do with it.
Love your bunny pics.

Hey MDR. I saw the new addition. That could be interesting. heheheh. Looks like your going to have to learn how to knit. lol!

Yeah more goats! Hope they fill out quickly for you! I am really wanting the meat rabbits but havent got them yet.. Things have kind of been crazy around here lately. I havent been blogging near as much but sinc we had new babies its picked up some.. Oh and new goats for us too..lol

Welcome back :)
The baby bunny is sooo cute!

Tonia, I saw on your blog about your goats. Must be give a goat away month. LOL

Glad to hear from you. Missed ya'.
Love your new family members. Especially the new darling bunny!! They are so sweet. I hope it's a girl too!! You have been one busy woman, that's for sure!! How has your riding been coming along? Would be nice for some horsey photos!!...debbie

ROFL, yer gonna have a place as messed up as mine soon! The every day petting zoo in more ways than one, LOL

what sweet additions you have made! Glad all is working out ok. It sounds like your staying really busy! I didn't know you could judge Quarter horses! You've been keeping secrets and hiking

Debbie, the riding is still comming along. I guess I should put some horsey pictures on here. heheheh

MM, I'm afraid this place is going to just getting worse and worse. LOL. But, I wouldn't have it any other way. :)

Sarah, I use to ride barrel horses a LOOOOOOONG time ago. I also rode a pleasure horse now and again. I trained and showed my uncle's pleasure horse for him. I didn't know I could judge either. I got wrangled into it at the fun shows. I don't have to have judge license to judge at a fun show. Who knew I could bring all of that "knowledge" back. LOL!

Welcome back! Such cute additions you have now!

Nice to see the new additions to your farm. The bunny is for sure the cutest! Hope your uncle is doing better and stays healthy.

Im a guy but i think bunny's are kind of cute, sometimes ill see a wild one near my back yard just hopping away. Richard