Time flies when your having fun( or, working your butt off). It's been very busy around here. Between chickens,horses and cows, we have hardly had a chance to breath. Oh, and throw a birthday party in there somewhere.


Hubby has made the cutest brooder house for the chicks. 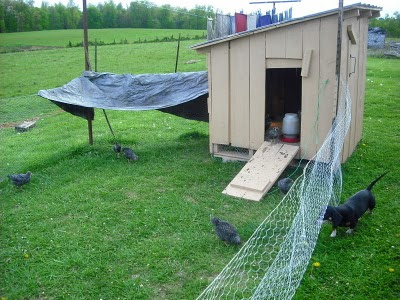 Notice Skeeter is still watching over her "babies?" 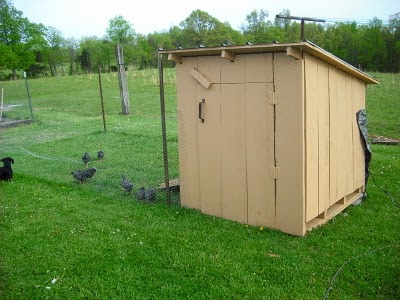 The oldest chicks have stayed out there for a few nights now. They love it. Every morning when we open their door for them to go outside, they will stand on the door and fly (well, try to fly) to the other side of their pen. As soon as I can figure out how to post videos on here I have some of the cutest videos of them. It looks like black and white popcorn.

Another video that I want to post is one of my uncles playing music at my uncle's birthday party. Okay, some of these videos are more funny than good.

Yet another thing that happened around here is we had another calf. Good news is, it was a good birth with a protective mother. Bad news, it died after a week. This is the third calf that this mother has lost. I like her, but not enough to keep her as a pet. She is going to go to the sale. Maybe she can help us catch up on some bills. We tried to bottle feed the calf, but by the time we knew the calf was in trouble, it was too late. We had to separate the mother from the calf just so we could get the calf to our barn. Remember me saying she was a protective mother? We used the truck to get in between them. Hubby jumped out, grabbed the calf, threw it up into the cab of the truck, and we drove like mad men to get to the gate. I think the momma knew her calf wasn't going to make it. She didn't try real hard to come after us like she normally does. The calf died a little after we got it away.

We also, had to play doctor to Scout.(Hubby's young colt) Somehow he skinned his leg up. We tried to keep wound solution on it. Any other time when he sees us coming to the fence, you can't keep him away. But, if you have the spray bottle in your hand, you might as well expect to chase him for a half an hour. Smart little booger. Once you catch him and put the spray on his leg, he's fine. The spray doesn't even burn or anything. He just don't want to be caught if it's not his idea. lol.

As soon as I can figure out how to put video on here, I will be posting some.

Good luck on the new house, my suggestion though, don't move in until it is all done because usually it won't get finished.

Nice chicken house! Sorry about losing the calf, but it does sound like that mom needs to go to the sale barn.Farm critters have to earn thier keep as mean as that sounds.

My goodness, it's been busy at your place! Sorry about the calf. Did it die because she wouldn't let it nurse? your little chicks are not looking so little these days - growing up mom! I do like the little house he made for them. You need to paint cute little flowers on the bottom and a sign that reads "Girls Rule"!!
Been wondering where you've been. Hope the colt is doing ok, they can get themselves into more trouble!!...debbie

Wow, that was a very busy week! What actually happened with the calf...that is so sad. I'm a new reader and I love your blog!

Thanks for the comments guys!

Nicole, if I was to wait to move in until it is done, I would NEVER move in. lol. We have been working on this house for over 4 yrs now. We are paying as we go. We don't owe a thing on it.

Maria, the only reason that we could come up with about the calf, is the mom just didn't give enough milk. Don't really know.

Love the chicken house, adn sorry about the calf! thats too bad.
Take it from me, I have experience in do it yourself remodeling/building. If you move in, everything comes to a stop. You'll live in that house for over a year with no insulation if you jump the gun. I know its tempting, but later you'll be pulling your hair out as you try to cook in an unfinished kitchen as you gaze down into the basement through the gap in the floor that the baseboard should cover. Trust me...I know! Just hang out where you are for a while longer. You'll get there, and LOVE living in a finished house!

Seeing as you have been so busy..Ill excuse you for the lack of blogging,lol !
Your chicks have grown so fast !! Skeeter is doing a great job :0)
I can understand your excitement about the house! And I would move in too,without walls and rugs,lol.
Have a happy weekend !

Your chicken coop is darling. If the pen is small enough, you might put some chicken wire on the top too - hawk deterrent :-/.

Ha! My chicks do the same thing, when you open the door they try to "fly" across the pen! So cute!

How exciting! The house is almost ready to move in. Yay!
The chicken brooder house is adorable. ANd so are the chicks. Of course Skeeter is such a good dog for watching over them, too.
Sorry about the calf. I wonder what is going on with all her babies. Weird.
I hope you're able to sell it her, though. Farming is not easy, that's for sure.