That's right, I said it, I am in love. And this time, I'm not talking about my husband. It's with these. 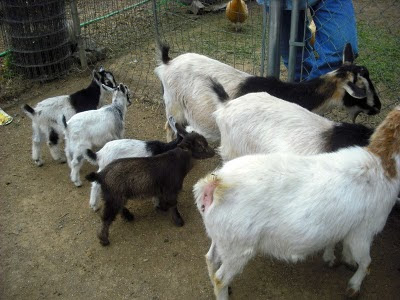 My heart has been stolen by these small, bouncy balls of fuzz. Catherine from Kentucky Hollers, has these beauties. 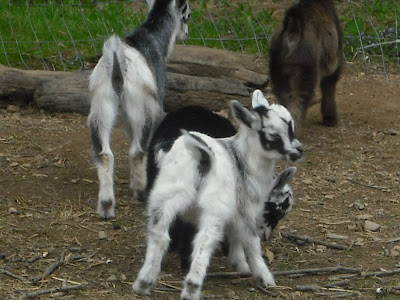 And now, I get to get two of them. YEA!!!!! I have always loved goats. I had one when I grew up. Want to guess her name? Get ready for it........Nanny! Original huh? Well anyway, I have thought about getting goats for a little while. Hubby is lactose intolerant so I thought he could drink goat milk. But, being the smart one that I am,(or I thought I was)I wanted to make sure I liked goat milk before I bought a goat. So I went to Wal-Mart(don't judge me!) and bought some "goat milk." EEEEWWWWWW!!!!!It was soooooo nasty. Boy, was I glad I bought and tried some milk before I got a goat. Now I won't waste my money.

Well, this weekend we went down to the Jenny Wiley Park for some seminars about making money on a small farm. It was good, but some of the stuff I already knew. One of the big things that they said was coming up right now, was goat milk and cheeses. Too bad I don't like the taste of goat milk. Another thing they said, the goats eat scrub brush and thorns. Our pasture can get overrun by cockle burs and such, if we don't bushhog it every so often. Goats would save us from having to do this. Hmmmmmm.

Anyway, after the seminars were over, we went do visit Catherine's goats. I told her that I didn't like the goat milk that I tried from Wal-Mart.(don't judge me, again!) She gave me some to try. She just milked her goat that morning. All I have to say is YYYYYUUUMMMMM!!!!!!!!It was wonderful!!!! Nothing like the Wal-Mart milk.(don't judge me) I should have known better.

Now after all of that, me and Hubby have decided to finally get us some goats. As soon as they are weaned, we are getting two doelings off of Catherine. So now, I can show pictures of MY goats. lol. Now here are some pictures of Catherine's goats. Just so you know, two of the small ones are mine. The dark one that she calls Mudd, is mine. I just have to pick out another one. I'm so excited!!!!! Okay, here are some pictures. 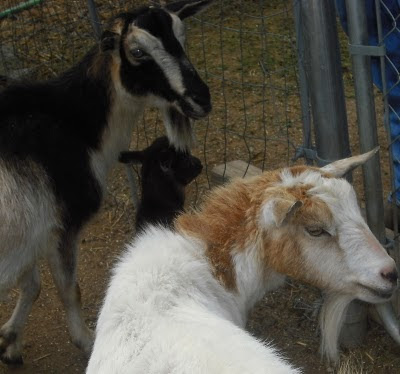 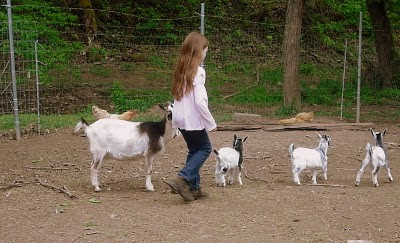 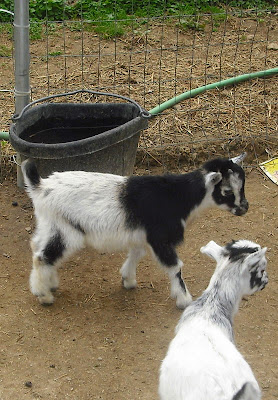 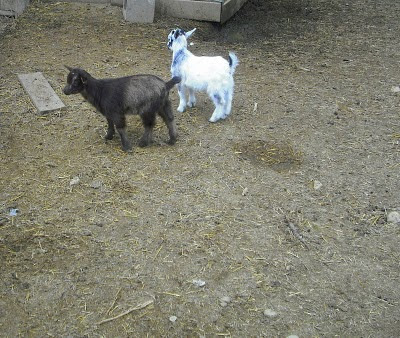 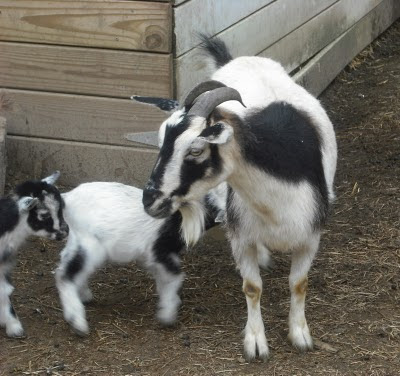 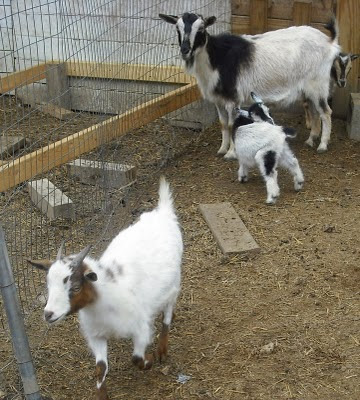 Okay, I just want to warn you, there will be more pictures of these cutes when they get to my home. So, you had better like pictures of goats. Lol!

Hello from a neighbor in WV. Stopping in via A Ranchers View. Nice blog, I couldn't resist one of those goats either.

The goats are too cute, congratulations on the new additions. :)

OOOOOOO you are so lucky ! They are so cute. I look forward to seeing lots of pics and watching them grow when they are yours : )

I like goats, Mike doesn't and he doesn't like the milk either, so..... we have cows! They are precious, boy are you going to have fun!
Can't wait to see the pictures when you get them home. Congrats and now you'll hve milk and can make some really great cheese*wink*
Blessings,
Kelle

LOL I cringed when you said you tried to goats milk from Walmart.. I dont know what that stuff is but its not Right for sure!Lol
YEAH For goats! They are adorable! Those little ones just steal your heart..
Woo Hoo Another goaty person!

congratulations! We are going to be getting two goats in the next couple of weeks. We are scrambling to get the barn ready.

Yippee!!! SFG is a new goat owner!! Welcome to the wonderful and wacky world of caprines!

Oh so jealous right now! You're living more of my dream! I want a pair of goats so badly. One day...
Are they French Alpine? They look it. That's exactly what I'm wanting! I've not tried goat milk just yet, but plan to give it a try when I can find some. I didn't even know they had it at Walmart, but now I know not to try theirs. I have to find some good stuff so I can persuade my hubby. He's convinced goat milk is nasty stuff from a former experience. Maybe we can stop in sometime and try some of your goat milk and cheese!

Adorable! Please blog like crazy about these little darlings. I've wanted to get goats for years now, and will love living vicariously through your experiences!

They are so cute. Our goat just had two babies 5 days ago. These are our first babies and they are so cute if I had time I could sit out there and watch them all day. We have dairy cows so it is nice to pick up the little things compared to a calf. I have not yet tried goat milk but even if I don't like it I plan to use the milk for soap and if I do like it cheese and fudge. People tell me it is great!

They are so cute! Keep us updated.

The goats are just darling and I thought it would be fun to have goats. I hear they are hard to keep contained. But I know nothing. So pay no heed to me. Good thing they like brush! But, I guess goats eat anything RIGHT?!!...debbie

So, you know how to milk a goat? My two girls are due May 5th and May 10th (Nubiens) and I will have to learn how to milk. I have milked one goat one time! But soon I too will have little cute baby goats running around.

Goat milk is good to have on hand too for feeding almost any sort of baby animal. It's the best for bottle lambs...your next addition ;-).

Goats and good fencing...a match made in heaven, ha :) I'm so glad you tasted fresh goat milk before deciding on whether to get them or not...I love fresh cow's milk but can't stand the milk from the store. yay for you and the new babies :)