It's a quarter to four in the morning and I am wide awake. Not because I want to be, it's just so hot in the house tonight. If you have a wood burning stove you understand. You start a fire in it because it's a little chilly. It feels so good when you first start it. Just takes the chill off. Then you throw a few sticks of wood on for the night thinking it will get colder. But, ooooooooooh no, it doesn't get cooler it gets warmer. Now I'm setting here with the doors and windows open trying to get some cool air in from outside. The weather is hard to predict this time of year.

Anyway, nothing really exciting has happened around here. I canned 11 quarts of apple butter a few days ago. It came out pretty good, but I think it needs more cinnamon. I will put more in the next batch. I make it in a big turkey roaster. It's soooooo easy that way.

This is what Hubby has been up to lately. I just love when a man does manual labor. lol.He has a lot cut and split. I look for it to be a hard winter so he is making sure we have enough. 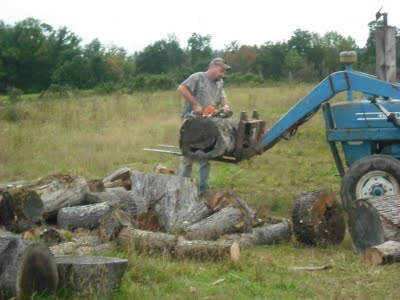 Two weeks ago, we decided to go to an herb festival that had been advertised for some time now. It rained hard the night before. So when we arrived, they were having people park miles down the road, and they would bus you in. They had an old school bus driving back and forth delivering people to and from the festival. They also had a tractor pulling a big buggy full of people back and forth to their cars. We found what seemed to be a nice place to park. We paid our 5 dollars(yes 5 dollars to park) and started to go back into the field where everyone else was parking. Hubby asked the man taking the money if the ground was to soft to park there. We had out little Honda Civic(to save on gas,it was an hour drive to get there)and we didn't want to get stuck. "No problem," the man said,"Just follow that truck going in there and don't stop." Me and Hubby looked at each other and thought,"Okay, if you say so." Well, this is what happened. We got stuck. 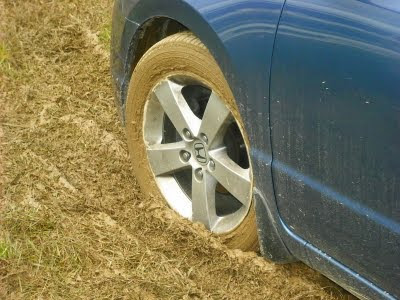 Not only did we get stuck, but the white car got stuck. And if you look in the back ground, you will see another car that got stuck. The man just kept bringing in more cars and more cars kept getting stuck. It was the slimy clay mud.I know it doesn't look like much in this picture, but, it was like trying to drive on ice. The ground affects on the car was touching the mud. Notice how deep the white car had sunk. We asked the ladies in the car if they had talked to the guy taking the money. They told us that he had someone on the way. That was a 1/2 hour ago. So Hubby went to talk to the man himself. He was blaming Hubby for stopping his car. He said that was the reason we got stuck. I say the reason we stopped the car was BECAUSE we were stuck. People now a days. 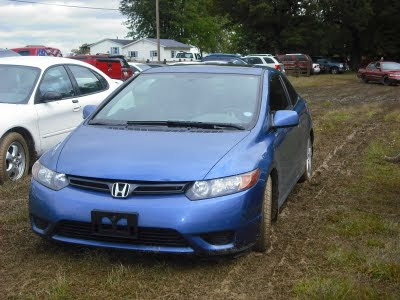 Anyways, the cavalry finally came in the form of this big dump truck full of wood shavings. 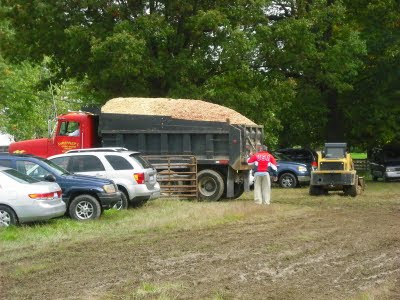 This guy hooked a chain onto the cars and pulled them out. (And yes, that is an Amish driving the bobcat) 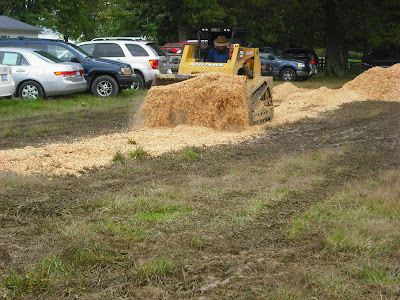 By the time we were pulled out, the festival was closed for the day. We were not happy campers. We did get out 5 dollars back though. We sat in front of his gates until he gave it back to us. (Yes, I'm a little bull headed)

But the next day, I had calmed down some and talked( tricked) Hubby back into going again. I really wanted to see all the herb stuff. So this time, we took the truck. Yes the gas mileage was horrible, but we were not going to get stuck this time. By the time we got there, a lot of the mud had dried up. We could have taken the car. Once again we paid our 5 dollars and went into the festival(which was held at some guy's farm)The flier that we saw said there would be 150 vendors. AAAAhhh yea. There might have been 50. Three out of those 50 had something to do with herbs. The rest were selling food or crafts or antiques. Don't get me wrong, I like those things too. But, I wouldn't have come back for crafts and antiques.(Well maybe the food, but that's a whole other issue that I have. lol)NO HERBS! Why call it an "herb festival" if you aren't going to have herbs? I guess we learned our lesson.

Good Grief! sounds like the people weren't prepared for rain and mud. What a mess. I probably would NOT have gone back and I can tell you 100% that Bob wouldn't have gone back...lol you have a very sweet hubby!!! I'm sorry you can't sleep. I am lucky that I can fall a sleep in a nano second. good night and good morning!!...debbie

I totally relate to it being to hot and thankfully you don't have to feel bad about opening windows and doors,*giggle* It's just the labor involved with wood that goes out the door and window, not your $$

It seems the festival wasn't prepared any way you look at it. Sorry you got stuck, but our AWD Aztek gets stuck in mud easily, if the wheels spin the AWD is disabled, it to keep something from breaking. It can be embarrassing though, I got stuck at the local grocery store last winter. There was a little dip that the front wheels went into and it was icy, well, I couldn't get out without swinging the back end around and hitting another car so... I had to go back into the store and ask one of the men to give us a push. Thankfully this is a small community and everyone knows everyone, the man didn't have a problem with helping at all, it was I who felt dumb!

I'll share a hint, if you have problems with apple butter scorching or burning in the bottom of the roaster, well my secret was is cook it down on low in a crock pot, it never scorches or burns. I also add a few drops of cinnamin oil( the kind used in candy making) to our butter and it's so..... yummy!

Oops, they were trying for more than they could deliver, weren't they!

Good for you on making sure you were reimbursed. Stubbornness CAN be a virtue, in the right circumstances. :o)

I love watching men doing manual labor as well.... hmmmmmmmm is that the feminine form of a wolf whistle? LOL

Thanks guys for commenting. They people that put on the festival have been doing it for a few years now. Maybe it has never rained on them before.

Yes Faith, if I could have spelled the sound of a wolf whistle, I would have put it on here. lol

I completely understand about the woodstove. My stove is in the living room and it gets so hot in there you have to open the door and let in some cool air. But if you go into our bedroom on the opposite side of the house you freeze.

I so understand about the wood heat!!Lol Hey it enables you to have Fresh air when others cant!! I wouldnt have went back!! How disappointing!
I have to agree on watching the manual labor..... hehehe I am always awestruck!lol

I TOTALLY know what you mean about the heat!!

Grrr! After the first day of wasted time and gas I would have demanded free parking to come back the next day, too. Did it cost to get in as well. Sheesh! What a rip-off. So many times these types of festivals are just like big flea markets and don't focus on the main theme of the festival. It's so frustrating. You were nicer than I would have been.

And what was up with that Amish guy driving a a mechanized vehicle. I thought that was a huge no-no for them?

Is it just the economy and he needed a job badly? What have things come to?!