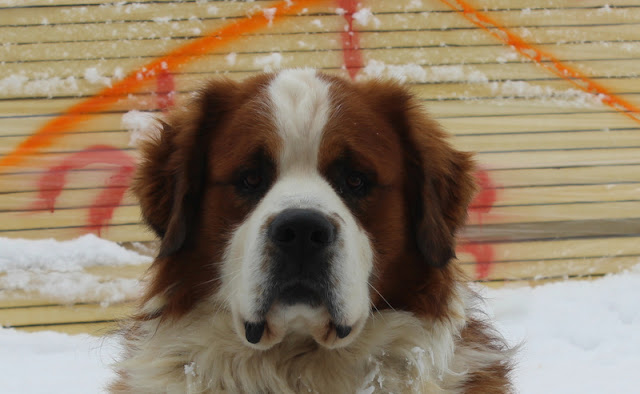 I hate to write this post.  I hate it, I hate it, I hate it.   But......
We have to rehome Jack.  We have tried for 3 years to keep him from killing our chickens, but it's just not working.  We have even put the chickens behind a fence reinforced with cattle panels and he got in and killed them.  HE BENT THE CATTLE PANELS to get in and kill the chickens!!!!!!  He has cost us more money and more time than any other animal on the farm.  He has to go.

We found him a home a few miles away from us.  He will be living with a military vet and his wife and kids (which he loves).  They live up a holler where there is no traffic.  This is good because Jack had gotten to where he was running after certain cars that would go down the road. He would have gotten hit here sooner or later.  His new family also has 77 acres of land that he can run on. That's more than what he has here too.

I'm going to miss him.  He really was a good dog to me.  He guarded me like it was his job, which it was.  Now he has another family to guard.  A family that doesn't have chickens, and a family that has children that he can play with.  I know it will be an adjustment, but Jack loves EVERYBODY (especially kids) so I know he will be fine.  Actually, he will probably be more than fine. He will love his new home.

With us living on a farm, we will need an outside dog.  I don't know if we will use one of the Aussies as an outside dog, or get another dog.  If we get another one, we'll go to the dog pound and get one.  We think a pound dog makes the best dogs.  We have gotten them there before.  We usually get an older one because we know that an older dog doesn't have a huge chance of someone taking him home.  And, what dog wouldn't want to live the rest of its life on a farm?

We had tried everything so that we could have kept Jack.  I didn't want him to have to live his life on a chain or in a small kennel.  I like him too much for that.  Although it's not easy for me, I know this is what's best for everyone.  We had planned on getting a good flock of chickens soon.  I know that if he had killed them, we would have done something in anger and I don't want that.  Once again, I think we are doing the best thing.  It's still not easy.

P.s.  Please no negative comments or telling us what we "should have done." We have tried EVERYTHING.

I've had to re-home a couple of dogs, it's so hard to do. Good for you for doing what's best for Jack (and your farm). Hugs!

Preppin in a trailer park said...

I am sorry to hear this about your dog. I once had a dog that I had to get rid of, too. I was in high school and it broke my heart. Unfortunately the dog had a bad habit of escaping our fence, chasing anything that moved and barked all day and all night. Drove the neighbors insane and the city fined my mom. So off the dog went. To a farm. It was someone that my dad knew so we could get updates. She was happy as ever, chased anything she liked and lived out her days in bliss. Much better situation than our house. I missed her greatly, but was relieved she was so happy. So, feel low. Miss him. But take joy in the fact that he will be happy at his new home.

:( I'm sorry. I know it must have been hard to rehome him, but for your peace of mind and Jack's safety, it was the right thing to do. ~Hugs~

When I saw the headline, I thought Jack had crossed the Rainbow Bridge so reading this was a relief. Sometimes dogs just aren't a good fit and you've done the right thing for all of you in rehoming him. Sounds like he's going to a wonderful family and he will be a happy, happy dog! God bless, Jean

Please don't use the Aussie, they need to be around their people, and it will kill their spirit to do that. Get a guardian dog, one that was bred to live outside and protect.

Thanks everyone for the nice comments. They do make me feel better. And don't worry Longtime wife, I don't think I could keep those goof head Aussies outside. Lol. I would miss tripping over them. Lol

Sometimes we have to rehome animals. For their sake and ours. You found him a good home, it sounds like one he will love.

I am having to rehome Skittles our little Whether goat. Since Cube passed away he has just done awful, he isn't eating good, he maws a lot. He is lost. We don't have any other goats and do not plan to get more. He needs some other animals to be with. He is a clown and a good fella, I think I will be able to find him a good pet home.

You made a very wise decision for both the dog and yourselves. One of our rottweiller girls took to killing chickens when she was a puppy, but we managed to stop her from doing so....didn't use any particular method that I can remember but she did stop. She also chases cars but only when she is in the field and they are on the opposite side of the fence.
I am sure that you will connect with the right dog when it is the time for you to do so. x

You're very brave. Its hard to do something like this, BUT!! It sounds like he is going to have a blast with his new family! What is more fun than having a mob of kids to play with? You did what is best for all of you. Good luck finding another outside doggie. I agree, the shelter dogs are diamonds in the ruff ( pun intended ). Its the only place we've gotten our dogs, and each of them have been gems on our little farm. Keep us posted!

You made the best decision. You need a dog that can understand small livestock. Chickens are so important for a farmstead and their loss is too great. You will find that great farm dog. Have you considered English Shepards?

I hate rehoming, but if animal's life is at stake, or another animal's life is because of the other, you do what you have to. We had to rehome a goat, who learned to escape our (very good)4ft fencing. We put up electric, she went over the gate. We put electric over the gate, she jumped from the roof of her house, we moved the house and then, she learned to RIDE THE SHEEP to the corner and jump the fence, electric and all! I didn't want her to be coyote bait, so we found her a proper home, with 5 foot(plus electric) fencing. Once a dog is fixated on chickens, it's nearly impossible to stop. Sounds like you found an appropriate home, and good luck finding a suitable farm dog.

Thanks once again for the nice comments.
Fiona, I think we are going to wait a little before we get another dog. We are gonna let the dog pick us.
Texomamorganlady, that's one smart goat!!!! LOL!!!