Ok, enough of the teasing.  Here is the new addition.  I got my horse back,again. 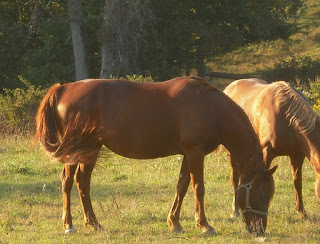 Don't get me wrong, I liked my horse .But, I gave her away TWO TIMES!  I gave her away because she was chasing the baby calves and we don't have a way to separate them.  The people I give her to keep bringing her back. The first couple that I gave her to, decided they were going to drive a truck over the road and they wouldn't be home to take care of her. 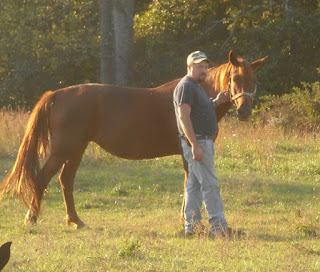 The last couple that I gave her to, was an older couple. They said they were just going to watch her eat in their pasture. They were going to make a pet out of her. Well, they brought her back. The lady decided that she was going to ride her. Now, remember, these people are "city" people. They know NOTHING about riding horses. Well,the lady wanted to make my horse go faster so that she would my horse up into her smooth gate. So, she swarped her with the ends of the reigns. Foxy(yes, that's my horse's name.) stepped up a bit. As she was getting closer to the fence, Foxy turned instead of stopped. So the lady fell off of the side. The lady didn't know that you pull back on the reigns to make a horse stop. She said she just thought you said,"Whoa." Seriously? It was hard for me to keep a straight face. Anyway, we got her back, again. Anyone want a horse? lol

While we were messing with the horses, the cattle came up to see if we had any goodies. And, since I hadn't taken pictures of them lately, I thought I would get some pics just for you all. hehehehe

This is what Blue looks like now. He has grown up. 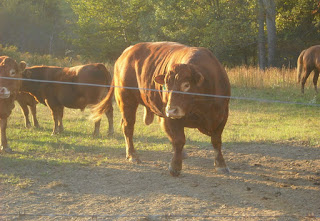 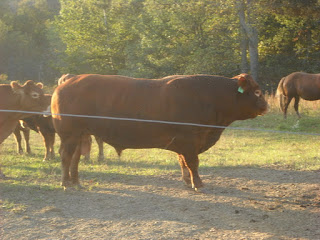 Here is some of his "babies." Not so baby like any more. 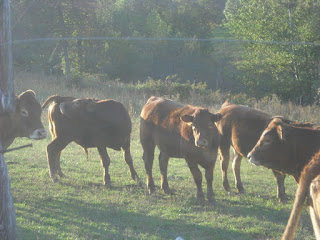 He would make someone a good bull too. But, he will probably end up at the sale. 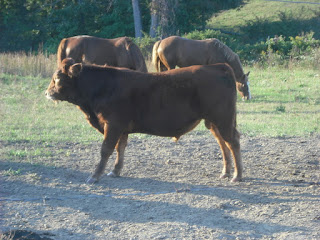 So, now you had a small glimpse of our big animals. Plus, the new, old one,again.

Sorry to hear about your horse. Some people, eh?

Nice looking horse. At least she didn't take the jump...Are you going to ride your horse?
And a huge bull! WOW! I like the looks of your heard too, and no the babies don't look like babies any more.

Carolyn...I haven't seen her chase the calves since they have grown. lol

SLF...I would have loved to of seen the spill. I thought about the horse jumping the fence too. hehehehe

I'm a Texas gal, raised around horses and it's always amazing to me how people think horses can be raised like their family dog. Funny.

Fine looking cattle there. Glad to hear you got your horse back as well!

People crack me up when they think they can just jump up on a horse and ride off! Nice looking cattle!